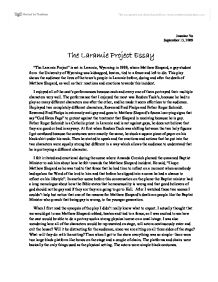 Jasmine Yu September 13, 2009 The Laramie Project Essay "The Laramie Project" is set in Laramie, Wyoming in 1998, where Matthew Shepard, a gay student from the University of Wyoming was kidnapped, beaten, tied to a fence and left to die. This play shows the audience the lives of the town's people in Laramie before, during and after the death of Matthew Shepard, as well as their reactions and emotions towards this incident. I enjoyed all of the cast's performances because each and every one of them portrayed their multiple characters very well. The performance that I enjoyed the most was Reuben Tuck's, because he had to play so many different characters one after the other, and he made it seem effortless to the audience. He played two completely different characters, Reverend Fred Phelps and Father Roger Schmidt. Reverend Fred Phelps is extremely anti-gay and goes to Matthew Shepard's funeral carrying signs that say "God Hates f**s" to protest against the treatment that Shepard is receiving because he is gay. ...read more.

I was also wondering how all of the characters would be represented on stage, will actors continuously enter and exit the house? Will it be distracting for the audience, since we are sitting on all three sides of the stage? What will they do with the setting? Then when I got to the show everything was so simple- there were two large black platform like boxes on the stage and a couple of chairs. The platforms and chairs were basically the only things used as the physical setting. The actors wore simple black costumes. As the production progressed I noticed that the actors changed their costumes on stage in front of the audience. At first I found it strange because I've never seen actors change on stage before, and then I began to find it distracting, because I began focusing not on the actor who was acting, but on the other actors who were changing their costumes and characters. However, the lighting helped me focus on the actor who was speaking. ...read more.

When you are watching a movie, you do not have any impact on what the actors are doing. But you can see the actors more clearly and their tiny movements can mean a lot of things, while in a play the audience will not be able to see small movement, so everything must be exaggerated. The audience enjoyed the play. During intermission when we were told to leave the house the audience members were all talking about the play. During the play there was this woman pointing out certain performances to her friend and telling her the names of a few of the characters which she thought were worth pointing out. After the play, when we could ask the cast and director questions there was a man who was so awed by the show that he was disappointed that it was not performed on a much larger stage and he kept bringing it up over and over. I would give "The Laramie Project" five stars because the actor's performances as different characters were all incredibly memorable and distinct; the space provided was also used very well. ?? ?? ?? ?? ...read more.