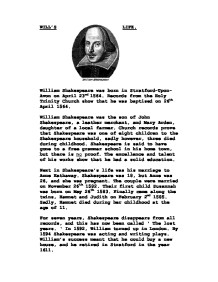 The excellence and talent of his works show that he had a solid education. Next in Shakespeare's life was his marriage to Anne Hathaway. Shakespeare was 18, but Anne was 26, and she was pregnant. The couple were married on November 26th 1582. ...read more.

' In 1592, William turned up in London. By 1594 Shakespeare was acting and writing plays. William's success meant that he could buy a new house, and he retired in Stratford in the year 1611. William Shakespeare also wrote his will in 1611, ( a copy of the will is in the project. ) and it is alleged that he died on his Birthday, April 23rd 1616, 53 years of age. Anne Hathaway's Cottage. ...read more.