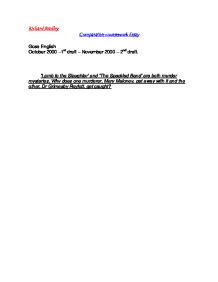 &amp;#145;Lamb to the Slaughter&amp;#146; and &amp;#145;The Speckled Band&amp;#146; are both murder mysteries. Why does one murderer, Mary Maloney, get away with it and the other, Dr Grimesby Roylott, get caught?

as being 'Marked with every evil passion'. A description like this makes it easy for us to judge him and to condemn him in our minds. Also, we discover that Dr Roylott has already killed before and so therefore we can easily suspect him of repeating a crime, even though we have no proof. On the sixth page (p155) Helen Stoner says, 'Violence of temper approaching mania has been hereditary in the men of the family, and in my stepfather's case it had, I believe, been intensified by his long residence in the tropics.' This shows that Dr Roylott is capable of violence. Richard Bradley Comparative coursework Essay This description of Dr Roylott is in complete contrast to Mary Maloney. She is a loving, devoted wife and a gentle person. She is not the type to commit murder, if there is a type. We empathise with her because we are placed on her side. She worshipped her husband who she thought was Mr. Perfect and he has shocked her by doing something very wrong. She creates a moral dilemma in our minds because publicly we cannot condone murder, but privately we understand why it happened. The efficiency of the detectives is different in both stories. As we read from a third person view in 'Lamb to the Slaughter' we can watch the inefficiency of Jack Noonan and his teams misguided attempts at finding the murderer. ...read more.

After discussing the topics that I listed at the start of this essay, I now need to answer the question 'Why did Mary Maloney get away with murder?' I believe that it was not because she was a cleverer murderer than Dr. Roylott. He was certainly better at planning his murder as she did not plan her murder at all, it was impulsive. His method was tried and tested because he had killed Julia Stoner, two years before. I personally think that Mary Maloney got away with murder because of the era when her story was written. As 'The Speckled Band' was written at a time when Great Britain was all conquering, Sherlock Holmes had to succeed and Sir Arthur Conan Doyle was under pressure to make it happen. If he had written the Sherlock Holmes stories today it would not have mattered so much if Holmes had failed for once, much as Mary Maloney getting away with murder did not cause outcry when that was written. The detectives in 'Lamb to the Slaughter' fumbled around, missed the vital clues and were too blinkered to suspect anyone like Mary Maloney. I think Roald Dahl intended this as he knew his books would sell if they were different. All in all I enjoyed reading both of these short stories and after writing this essay it is hard to imagine that they are both fictional! ...read more.