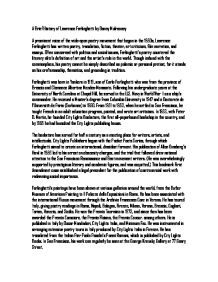 A Brief History of Lawrence Ferlinghetti by Danny Mulrooney A prominent voice of the wide-open poetry movement that began in the 1950s, Lawrence Ferlinghetti has written poetry, translation, fiction, theater, art criticism, film narration, and essays. Often concerned with politics and social issues, Ferlinghetti's poetry countered the literary elite's definition of art and the artist's role in the world. Though imbued with the commonplace, his poetry cannot be simply described as polemic or personal protest, for it stands on his craftsmanship, thematics, and grounding in tradition. Ferlinghetti was born in Yonkers in 1919, son of Carlo Ferlinghetti who was from the province of Brescia and Clemence Albertine Mendes-Monsanto. Following his undergraduate years at the University of North Carolina at Chapel Hill, he served in the U.S. ...read more.

(He was overwhelmingly supported by prestigious literary and academic figures, and was acquitted.) This landmark First Amendment case established a legal precedent for the publication of controversial work with redeeming social importance. Ferlinghetti's paintings have been shown at various galleries around the world, from the Butler Museum of American Painting to Il Palazzo delle Esposizioni in Rome. He has been associated with the international Fluxus movement through the Archivio Francesco Conz in Verona. He has toured Italy, giving poetry readings in Roma, Napoli, Bologna, Firenze, Milano, Verona, Brescia, Cagliari, Torino, Venezia, and Sicilia. He won the Premio Taormino in 1973, and since then has been awarded the Premio Camaiore, the Premio Flaiano, the Premio Cavour. ...read more.

His most recent books are A Far Rockaway of the Heart (1997), How to Paint Sunlight (2001), and Americus Book I (2004) published by New Directions. He has been the recipient of numerous prizes, including the Los Angeles Times' Robert Kirsch Award, the BABRA Award for Lifetime Achievement, the National Book Critics Circle Ivan Sandrof Award for Contribution to American Arts and Letters, the American Civil Liberties Union's Earl Warren Civil Liberties Award. Ferlinghetti was named San Francisco's Poet Laureate in August 1998, and he used his post as a bully-pulpit from which he articulated the seldom-heard "voice of the people." In 2003 he was awarded the Robert Frost Memorial Medal, the Author's Guild Lifetime Achievement Award, and he was elected to the prestigious American Academy of Arts and Letters. ...read more.