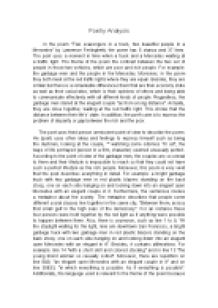 Contrasts in Two scavengers in a truck, two beautiful people in a Mercedes by Lawrence Ferlinghetti

﻿Poetry Analysis In the poem ?Two scavengers in a truck, two beautiful people in a Mercedes? by Lawrence Ferlinghetti; the poem has 5 stanza and 37 lines. The poet uses a moment in time when a truck and a Mercedes waiting at a traffic light. The theme of the poem the contrast between the two set of people in those two vehicles, which are poor and rich people. For example: the garbage men and the people in the Mercedes. Moreover, in the poem they both meet at the red traffic lights where they are equal. Besides, they are similar but there is a remarkable differences them that are their economy state as well as their social wise, which is their opinions of others and being able to communicate effectively with all different kinds of people. ...read more.

Moreover, it gives me a feeling that they are living in two different places that are impossible to reach each other. Besides, it gives me two feeling that are despair and happiness, which could also be h**l and paradise. I have a feeling that one of them are living in a place where they are in a vacation and one is in a place where they are suffering and they are admiring the people who are living happily. As well, the contrasts between these two kinds of people are like a unique piece of music that was created in the period with two dramatic mood and characteristics. In conclusion, this poem gives a vivid description of two kinds of people that I am also in that scene and understanding the gap between the rich and poor. In the end, the poet achieves her purpose of comparing two different economic wise people. It reminds me of the problem of disparity between the rich and the poor. ...read more.