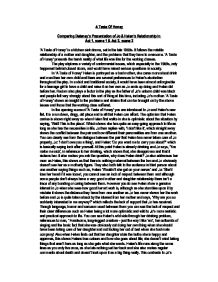 A Taste Of Honey Comparing Delaney's Presentation of Jo & Helen's Relationship in Act 1, scene 1 & Act 2, scene 2 'A Taste of Honey' is a kitchen sink drama, set in the late 1950s. It follows the volatile relationship of a mother and daughter, and the problems that they have to overcome. 'A Taste of Honey' presents the harsh reality of what life was like for the working classes. The play explores a variety of controversial issues, which especially in the 1950s, only happened behind closed doors, and would have raised serious questions in society. In 'A Taste of Honey' Helen is portrayed as a bad mother, she cares more about drink and men than her own child and there are several preferences to Helen's alcoholism throughout the play. In a strict and traditional society, it would have been almost unforgivable for a teenage girl to have a child and raise it on her own as Jo ends up doing and Helen did before her. Racism also plays a factor in the play as the father of Jo's unborn child was black and people felt very strongly about this sort of thing at this time, including Jo's mother. ...read more.

Also when Helen finds out that her daughter stole the bulbs she is happy and approves, this shows Helens true colours and how she goes about life; she doesn't mind taking things that aren't hers as long as she gets what she wants. Helen's life runs along the same lines as you only live once, as she lets nothing set her back and she also makes regular comments about death and doesn't look upon it as a big thing really. This contrasts to Jo's comment in Act 2, scene 2 where she says, 'We don't ask for life, we have it thrust upon us'. I think that Jo's out look on life is that it is hard and unfair; she has always had to fight for her self as Helen has never been there for her, and so she doesn't expect the good things to happen in her life. Jo and Helen's relationship about men in Act 1, scene 1 is also very strange, as Helen has clearly had many men in her life as when Peter is introduced Jo says in a very matter of fact way, 'What's this one called?' ...read more.

You also see a change in character with Jo, who in Act 1, scene 1 Delaney portrays her as the parent, with her doing things such as cleaning, but by Act 2, scene 2 when she is about to become a mother herself she is more childlike, this can be shown through the stage directions of Jo throwing the pretend doll that Geof gets her because it's the wrong colour. She acts like a spoilt child who comes across as ungrateful and shows no maturity in her at all. I think that in Act 2, scene 2 their relationship has progressed form Act 1, scene 1 as Helen is more of a mother figure towards Jo. However I don't think that they will have a good relationship, as Helen isn't very supporting when she finds out about the colour of the baby. When she is asked what she'll do she replies, 'drown it,' and she goes back to her old ways of drinking. This also suggests that she drinks to drown her sorrows. Also she leaves Jo on her own at a time that she needs her and there is some uncertainty about whether or not she is coming back. This sums up their relationship as one that is rocky and that there is no stability at all. ...read more.