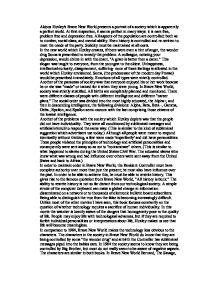 Aldous Huxley's Brave New World presents a portrait of a society which is apparently a perfect world.

Aldous Huxley's Brave New World presents a portrait of a society which is apparently a perfect world. At first inspection, it seems perfect in many ways: it is care free, problem free and depression free. All aspects of the population are controlled: both as to number, social class, and mental ability. Even history is controlled and re-written to meet the needs of the party. Solidity must be maintained at all costs. In the new world which Huxley creates, if there were even a hint of anger, the wonder drug Soma is prescribed to remedy the problem. A colleague, noticing your depression, would chime in with the chant, "A gram is better then a damn." This slogan was taught to everyone, from the youngest to the oldest. Unhappiness, intellectual curiosity, disagreement, suffering- none of these feelings is allowed in the world which Huxley envisioned. Soma, (the predecessor of the modern day Prozac) would be prescribed immediately. Emotions of all types were strictly controlled. Another of the panaceas of society was that everyone enjoyed his or her work because he or she was "made" or trained for it when they were young. In Brave New World, society was strictly stratified. All births are completely planned and monitored. There were different classes of people with different intelligence and different "career plans." The social order was divided into the most highly educated, the Alpha+, and then in descending intelligence, the following divisions: Alpha, Beta, Beta -, Gamma, Delta , Epsilon, and Epsilon semi-morons with the last comprising those citizens of the lowest intelligence. Another of the problems with the society which Huxley depicts was that the people did not have individuality. They were all conditioned by subliminal messages and artificial stimuli to respond the same way. (This is similar to the kind of subliminal suggestion which advertisers use today.) Although all people were meant to respond identically without thinking, a few were made 'imperfectly' and did have personalities. ...read more.

inside the city. This classification of citizens exists even in the modern world, where the well-to-do businesspeople live in higher-class suburbs while the lower class factory workers huddle in cramped downtown apartments. The social caste system, along with the conditioning of the citizens, creates prejudice among those who represent difference. Bernard Marx, an Alpha citizen, has a physical deficiency. He is short and small, "eight centimetres short of the standard Alpha height" (Huxley, 57), and is often neglected for his deformed figure. While Marx is sharing an elevator with two coworkers, "Henry Foster and the Assistant Director of Predestination rather pointedly turned their backs on Bernard Marx" (Huxley, 29). Bernard himself says that, "I am I, but wish I wasn't" (Huxley, 57). This self-hatred indicates that even in the most ordered, stable society injustice still occurs in the form of discrimination. The right to choose no longer exists in an autocratic society where social freedom is eliminated by the distinct categorical division of citizens. "History is more or less bunk" (Rae, 53), said Henry Ford. This ideology is taken to extreme measures in the World State and many totalitarian nations where censorship of art and religion completely conceals the past and eliminates the freedoms of thought and speech. People live in the present with no knowledge of history, and those who explore certain new, prohibited ideas are censored. "Art is the most intense mode of individualism that the world has known", said Oscar Wilde. Individualism, however, is not permitted in the World State where "everyone works for everyone else" (Huxley, 81). Many pieces of literature are eliminated, and censorship is applied everywhere to attain stability. Without the books to give the people ideas, and with the conditioning of the mind, no one would attempt a revolution or an uprising. No one in the World State would recognize the title Othello or the name William Shakespeare, no one but the people who make the rules - the World Controllers. ...read more.

Huxley's Brave New World illustrates how religion can be sacrificed for stability, where religion is no longer needed to satisfy human desire: ... why should we go hunting for a substitute for youthful desires, when youthful desires never fail? A substitute for distractions, when we go on enjoying all the old fooleries to the very last? What need have we of repose when our minds and bodies continue to delight in activity? of consolation, when we have soma? of something immovable, when there is the social order? (Huxley, 213) God now "manifests himself as an absence; as though he weren't there at all" (Huxley, 214). By not allowing the citizens to believe in something holy, something beyond imagination, the state is restricting the faith in her citizens and taking away the freedom to dream and believe. Henry Ford is glorified in the World State for his induction of the mass production method and "the introduction of Our Ford's first T-model ... chosen as the opening date of the new era" (Huxley, 46). The Big Ben is renamed Big Henry, the crucifix is replaced by the symbol T, and the Charing Cross Rail Road Station in London changes to the Charing T Rocket Station. Ford is the basis of religion in the World State just as Christ is in many modern religions. The people's minds can easily be manipulated by the state into believing anything, but the prolonged brainwash of the citizens creates a suppression of creativity, which results to a direct loss of mental freedom. The stable world of a government controlled society appears to be a Utopia, where everyone is happy and lives in harmony, but the price paid is comparable to the superficial happiness that the citizens receive. Without the freedom of choice, the citizens do not actually realize the joy when a task is accomplished. Without having to work for a goal, the people do not appreciate the pleasure once the goal is achieved and do not actually understand the true meaning of happiness. The price for Utopia, in a word, is freedom. ...read more.