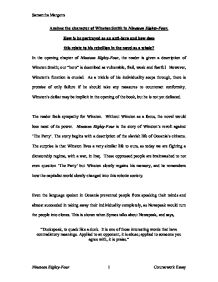 Analyse the character of Winston Smith in Nineteen Eighty-Four. How is he portrayed as an anti-hero and how does this relate to his rebellion in the novel as a whole?

Analyse the character of Winston Smith in Nineteen Eighty-Four. How is he portrayed as an anti-hero and how does this relate to his rebellion in the novel as a whole? In the opening chapter of Nineteen Eighty-Four, the reader is given a description of Winston Smith; our "hero" is described as vulnerable, frail, weak and fearful. However, Winston's function is crucial. As a trickle of his individuality seeps through, there is promise of only failure if he should take any measures to counteract conformity. Winston's defeat may be implicit in the opening of the book, but he is not yet defeated. The reader feels sympathy for Winston. Without Winston as a focus, the novel would lose most of its power. Nineteen Eighty-Four is the story of Winston's revolt against 'The Party'. The story begins with a description of the slavish life of Oceania's citizens. The surprise is that Winston lives a very similar life to ours, as today we are fighting a dictatorship regime, with a war, in Iraq. These oppressed people are brainwashed to not even question 'The Party' but Winston slowly regains his memory, and he remembers how the capitalist world slowly changed into this robotic society. Even the language spoken in Oceania prevented people from speaking their minds and almost succeeded in taking away their individuality completely, as Newspeak would turn the people into clones. ...read more.

Thinking that he is helpless to evade his doom, Winston allows himself to take unnecessary risks, such as trusting O'Brien and renting the room above Mr. Charrington's shop. Deep down, he knows that these risks will increase his chances of being caught by the Party; he even admits this to O'Brien while in prison. But because he believes that he will be caught no matter what he does, he convinces himself that he must continue to rebel. Winston lives in a world in which legitimate optimism is impossibility; lacking any real hope, he gives himself false hope, fully aware that he is doing so. Critic Jenni Clader writes, "Winston's awareness is crucial because it articulates and individualizes his rebellion." To me, this is shown when Winston is reading 'the book' in Mr. Charrington's shop and Julia is asleep. It shows that Winston is on his own in his attempt to rebel. This is highlighted by the fact that we really on see Julia in Part two of the novel. Winston is a contrast to other characters in the novel. In the opening chapter, we can compare his physical appearance with that of Big Brother. Big Brother is strong and powerful, compared with Winston, frail and powerless. He is also contrasted with O'Brien, who is also of strong physical appearance, and then again with Julia. ...read more.

O'Brien is pulling Winston's teeth out. It makes the reader cringe to read it. The reader gets a description of Winston's physical appearance. He is almost a skeleton. O'Brien tells Winston how much he has been reduced, "Look at the dirt between your toes. Look at that disgusting running sore on your leg. Do you know you stink like a goat?" This is not heroic imagery. He is "the last man" according to O'Brien and by the end of the chapter, Winston has realized what a terrible state he is in, and wept. O'Brien even managed to convince Winston that he did it to himself. Remembering the past is central to Winston's rebellion, but he seems to be the only one. His role in the novel can be considered in different lights: Is he the hero in his secret battle against Big Brother, or simply a sentimental man with a death wish. Winston lacks the intelligence or physical ability to use his knowledge against the Party. The trust that Winston places in O'Brien and Mr. Charrington leads to his tortured demise. However, it is Winston's ability to trust that makes him human and heroic in a world built on deceit. No matter how hard Winston tried, in the end, "Nothing in the world was as bad a physical pain. In the face of pain, there are no heroes, no heroes he thought over and over as he writhed on the floor, clutching uselessly at his disabled left arm. ...read more.