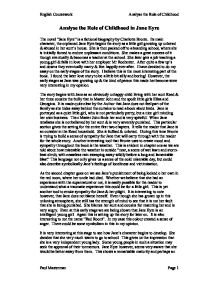 Analyse the Role of Childhood in Jane Eyre

Analyse the Role of Childhood in Jane Eyre The novel "Jane Eyre" is a fictional biography by Charlotte Bronte. Its main character, the orphaned Jane Eyre begins the story as a little girl growing up unloved & abused in her aunt's house. She is then packed off to a boarding school, where she is initially forced to endure unpleasant conditions. She makes a great success of it though eventually & becomes a teacher at the school. She later gets a job teaching a young girl & falls in love with her employer Mr Rochester. After quite a few up's and downs they eventually marry & live happily ever after. I have decided to do my essay on the early stages of the story. I believe this is the most interesting part of the book. I found the later love story to be a little bit silly and boring! However, the early stages as Jane was growing up & the kind of person this made her become were very interesting in my opinion. The story begins with Jane as an obviously unhappy child living with her aunt Reed & her three cousins the bully that is Master John and the spoilt little girls Eliza and Georgina. It is made quite clear by the Author that Jane does not feel part of the family as she hides away behind the curtains to read a book about birds. ...read more.

This gives us the impression that she is a very independent young lady. Some young people in such a situation may seek the approval of their tormentors. Jane Eyre however, seems very aware that she would be better away from them. This shows a remarkable maturity and perhaps an unrealistic one. Despite her desire to go to school and its suggestion by Mr Lloyd, nothing seems to come of it. Jane hit's master John when he attempts to bully her. From this moment her aunt makes Jane take her meals alone & her sense of isolation grows. Finally Mr Brocklehurst appears. But immediately we find him not to be what Jane had hoped for. He is described as a "Black Pillar" which immediately casts a dark light on him. Again Bronte has used colour to convey a mood or feeling. He expresses rather ridiculous ideas about religion that show him to be something of a zealot. Jane compares him in her mind to the wolf in little red riding hood "What a great nose! And what a mouth! And what large prominent teeth" His threat is lessened by Jane as she turns him into a figure of amusement. All this shows a pattern of behaviour emerging that Jane will not allow herself to be bullied or easily put down. It shows a remarkable strength and it makes the character very endearing. ...read more.

However, we also see that Jane is a fighter and is not prepared to just accept her lot. This endears us to her. You feel that despite all her knocks and bad luck that she has triumphed over adversity. She has been built up as a girl with an incredible spirit and somebody that could really go places in life. This was the point where I became a little disappointed in the novel. I had hoped that Jane may have gone and achieved something great with her life. I hoped that maybe she would travel the world or start her own school. I found the Love story that followed rather trivial and boring in comparison to the emotional roller coaster of her childhood. On reflection however, the book must again be put into the context of it's time of writing. Perhaps the world then was not ready for women that were too successful. In terms of the later part of the book, we see that Jane's character that is formed so young is carried through in the latter parts of her life. She has a strong belief that she should not stay with St John Rivers that she does not love truly. She also shows her passionate side with her undying Love for Rochester. Ultimately, it is pleasing that Jane eventually ends up with the man she truly loves and lives a happy life after the hard upbringing that she has had to endure. ?? ?? ?? ?? English Coursework Analyse the Role of Childhood Paul Masterman Page 1 ...read more.