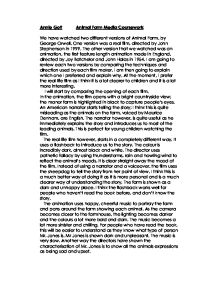 Annie Gott Animal Farm Media Coursework We have watched two different versions of Animal Farm, by George Orwell. One version was a real film, directed by John Stephenson in 1999. The other version that we watched was an animation, the first feature length animation made in England, directed by Joy Batchelor and John Halas in 1954. I am going to review each two versions by comparing the techniques and direction used by each film maker. I am then going to explain which one I preferred and explain why. At the moment, I prefer the real life film as I think it is a lot clearer to children and it is a lot more interesting. I will start by comparing the opening of each film. In the animation, the film opens with a bright countryside view; the manor farm is highlighted in black to capture people's eyes. An American narrator starts telling the story; I think this is quite misleading as the animals on the farm, voiced by Maurice Denham, are English. The narrator however, is quite useful as he immediately explains the story and introduces us to most of the leading animals. This is perfect for young children watching the film. The real life film however, starts in a completely different way. It uses a flashback to introduce us to the story. The colour is incredibly dark, almost black and white. The director uses pathetic fallacy by using thunderstorms, rain and howling wind to reflect the animal's moods. It is clear straight away the mood of the film. Instead of using a narrator and a voiceover, the film uses the sheepdog to tell the story from her point of view. I think this is a much better way of doing it as it is more personal and is a much clearer way of understanding the story. The farm is shown as a dark and unhappy place. ...read more.

The music becomes very loud and dramatic and as soon as Mr. Jones speaks. This is very powerful and chilling. There is also a brief pause to add tension. The camera angle becomes very shaky to show complete chaos. The next part I am going to discuss is the animals' first look in the farmers' house. The animation shows Mr. Jones' house to be a dark, massive and unfriendly place. It is shown from the animals' view of quite low to the ground and the enormity of the staircase is emphasised. Incredibly scary and chilling music is also played. This shows how the animals are feeling. Upstairs, there is silence apart from clocks and record players etc. Only the main characters are shown to be looking at his belongings. Here we also see the first glimpse of Napoleon being greedy and selfish by eating all the food. The real life versions portrayal of Mr. Jones' house uses not as good effects but is shown in a lot more detail. Again, the farmhouse is incredibly big and slightly scary music is played. You do not get the same effect of terror as in the animation. The director adds another scene where a pig opens a cupboard to show Old Majors' head. The camera zooms in very shakily and suddenly with horror music playing. It then immediately switches to the animals racing out of the house. The following part to exploring the farmhouse is the reading of the rules. I will now look at how the directors have portrayed this. The rules are shown to have been written by Snowball in red on the side of the barn. The camera scrolls down each one, emphasising them all. Snowball reads each one out at the same time so smaller children can also understand what is happening. Victorious music is also played to show how war-like the situation is. ...read more.

Squealer is also a very different colour to the other pigs so that he can easily stand out. Towards the end of the film his voice becomes more and more hypnotic and calming as he has to try even harder to persuade the animals to stay with Napoleon. This version of the film also uses a broadcasting principle to inform the animals what is happening. It is shown in the barn in flickering black and white. It has been use as we can familiarise with it as bearing bad news and being of importance to us. The broadcasts are the equivalent of the animations narrator as it sums up what has been happening on the farm. I like the idea of as the film progresses, fewer and fewer animals are watching the broadcast, until finally there are no animals left. The film that I have preferred is the real life version. I like the way the director adds more scenes to the film because if you have read the book, it is still interesting and it keeps you entertained. The animation skipped out to many important scenes, for example, the execution of the farmyard animals who had betrayed Napoleon. I preferred the realistic views of the film with the animals view points and expressions. I thought it was more comical as well. I liked the idea of the broadcasting as it was familiar to me and it modernised the book. The real film also was a lot more explanatory towards adults and children as well. However I do think that the animation is still a lot more suited towards younger children, it is just not suitable for adults and teenagers. I also liked the music more in the real film because in the animation, I often thought there was a lot more music than speech and it just became boring after a while. The real film is a lot more modern and I can relate to it a lot more that then film produced in the 50's. Overall, I think that the real film is a much better film in most ways. ...read more.