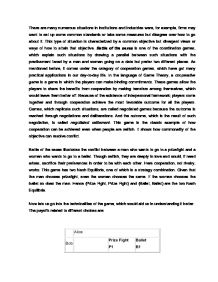 Battle of the sexes.

There are many numerous situations in institutions and industries were, for example, firms may want to set up some common standards or take some measures but disagree over how to go about it. This type of situation is characterized by a common objective but divergent views or ways of how to attain that objective. Battle of the sexes is one of the coordination games, which explain such situations by drawing a parallel between such situations with the predicament faced by a man and woman going on a date but prefer two different places. As mentioned before, it comes under the category of cooperation games, which have got many practical applications in our day-to-day life. In the language of Game Theory, a cooperative game is a game in which the players can make binding commitments. These games allow the players to share the benefits from cooperation by making transfers among themselves, which would leave them better off. Because of the existence of interpersonal framework; players come together and through cooperation achieve the most favorable outcome for all the players. Games, which replicate such situations, are called negotiated games because the outcome is reached through negotiations and deliberations. And the outcome, which is the result of such negotiation, is called negotiated settlement. ...read more.

Equation of the red line is Y = f (X) = 1-X, Where X is the probability of Man going to the prizefight and Y is the probability of woman going to the ballet. The joint payoff of the players is (X Y) and the feasible pay off region is the convex set enclosed by the lines joining the pay off pairs. The coefficient of X is called the pay off trade-off rate, since it is the rate at which man's pay off is traded-off with the woman's. Another dimension to the game can be added, by including a third option or alternative. This alternative should be relevant and should have an effect of changing the outcome of the game. The other alternative can be a food joint, which both of them like. In that case, they would not opt for either of their prior preferences. After negotiating or talking about each other's preferences and feelings, they may decide to go to their favorite food joint. This new state of affairs can be represented in the matrix given below. Alice Prize Fight Food Joint Ballet P1 F1 B1 Bob Prize Fight P2 1, 0 0,0 -.6, -.5 Food Joint F2 -.2, -.2 .4, .9 0, 0 Ballet B2 -.1, -.4 -.2, -.2 0, 1 Graphically, it can be explained as following.The line from (0, 1) ...read more.

It can be viewed as the mapping of the possible information of each player to a probability distribution over actions or outcomes. Focal points: In real life situations there are numerous equilibria. But out of these only few seem more likely to be feasible. The psychologically compelling Nash equilibria are called focal points. Past experiences and history form the basis of focal points. In Battle of the sexes, the choice of the equilibria, when the game is repeated over a period of time, depends on the on the focal points. Also focal points impart inflexibility to the game. As the number of times the game is repeated, the possibility of the change of Nash Equilibria cannot be ignored, as the payoffs tend to change. Mediation, communication, negotiation and bargaining also have place in Battle of the Sexes. Application of Battle of the Sexes * Setting industry wide standards is a good example of this game. All firms cooperate, Negotiate and set standards in such a way that it all of them get a favorable pay off. Eg: computer disk drives, pipe fittings, etc * Use of common language to formalize a sales agreement between two firms even They prefer different terms. Common language acts to the advantage of both the firms and help them understand the terms of the agreement better. * At the macroeconomics level, on such example is the formulation of the tax policies by The two tax authorities. ...read more.