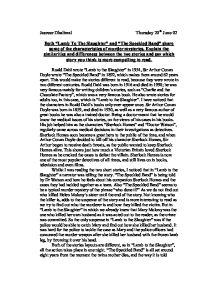 Both &amp;#147;Lamb To The Slaughter&amp;#148; and &amp;#147;The Speckled Band&amp;#148; share some of the characteristics of murder mysteries. Explain the similarities and differences between the two stories and say which story you think is more compelling to read.

Jasveer Dhaliwal Thursday 20th June 02 Both "Lamb To The Slaughter" and "The Speckled Band" share some of the characteristics of murder mysteries. Explain the similarities and differences between the two stories and say which story you think is more compelling to read. Roald Dahl wrote "Lamb to the Slaughter" in 1954, Sir Arthur Conan Doyle wrote "The Speckled Band" in 1892, which makes them around 62 years apart. This would make the stories different to read, because they were wrote in two different centuries. Roald Dahl was born in 1916 and died in 1990; he was very famous mainly for writing children's stories, such as "Charlie and the Chocolate Factory", which was a very famous book. He also wrote stories for adults too, in this case, which is "Lamb to the Slaughter". I have noticed that the characters in Roald Dahl's books only ever appear once. Sir Arthur Conan Doyle was born in 1859, and died in 1930, as well as a very famous author of great books he was also a trained doctor. Being a doctor meant that he would know the medical issues of his stories, on the views of his cases in his books. His job helped him as the characters "Sherlock Homes" and "Doctor Watson", regularly came across medical decisions in their investigations as detectives. ...read more.

publishers of the book have now made a new copy explaining at the bottom of the page what a strange word means. In this case that strange word in the quote above would be "dog cart". The Language used in "The Lamb To The Slaughter" is more modern English compared to "Te Speckled Band". I enjoyed how in "Lamb to the Slaughter" the story is happening as you read it and makes you want to read on further. Both murders are cleverly described in there own unique way. Roald Dahl describes Mary Malony as a loving woman, who cared and loved her husband. Mary and her husband seem to have a good life together, although it is more or less on routine. The text from "Lamb To The Slaughter" describes how well detailed the story can be. "When the clock said ten minutes to five, she began to listen, a few minutes later, punctually as always, she heard the tires on the gravel outside" It is described to show how something happens every day at the same time as routine. The small passage gave me a hint that today is not is not a usual kind of day for Mary and that something is about to happen. ...read more.

This is another verse by Sherlock showing us how very alert he is of his surroundings. So over all I would say there are more differences then similarities between the two short stories. This is because the writers were different, as Roald Dahl mainly wrote children's books, and also they were written in two different centuries. So in the end of the story, which is "The Speckled Band", Dr Roylott is caught by Sherlock Holmes, as he does in all of his cases. In "Lamb To The Slaughter" there is a different ending as Mary Malony gets away with the murder, and that was what the reader had to wait for, to see if she was caught. I think that Mary may have got away with the murder because in that time, there weren't many cases of women killing their husbands. Out of both stories I seem to prefer "Lamb To The Slaughter" and found it more compelling to read because of how different it is to other murder mystery type stories. Instead of the reader waiting to see whom the murderer was, in "Lamb to the Slaughter" the reader waits to see if the murderer is caught, as we already knew who the murderer was. After reading the two stories, I can see how the style of writing murder mysteries has changed from the Victorian age, up to the 1950's when "Lamb to the Slaughter" was written. ...read more.