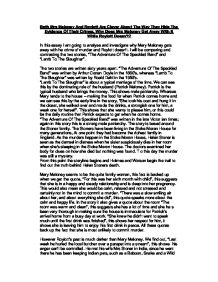 Both Mrs Maloney And Roylott Are Clever About The Way They Hide The Evidence Of Their Crimes. Why Does Mrs Maloney Get Away With It While Roylott Doesn't?

Both Mrs Maloney And Roylott Are Clever About The Way They Hide The Evidence Of Their Crimes. Why Does Mrs Maloney Get Away With It While Roylott Doesn't? In this essay I am going to analyse and investigate why Mary Maloney gets away with he crime of murder and Roylott doesn't. I will be comparing and contrasting the two stories, "The Adventure Of The Speckled Band" and "Lamb To The Slaughter". The two stories are written sixty years apart. "The Adventure Of The Speckled Band" was written by Arthur Conan Doyle in the 1880's, whereas "Lamb To The Slaughter" was written by Roald Dahl in the 1950's. "Lamb To The Slaughter" is about a typical marriage of the time. We can see this by the dominating role of the husband (Patrick Maloney). Patrick is the typical husband who brings the money. This shows male patriarchy. Whereas Mary tends to the house - making the food for when Patrick comes home and we can see this by the early line in the story, "She took his coat and hung it in the closet, she walked over and made the drinks, a strongish one for him, a weak one for herself". This shows that she wants to please him, or this could be the daily routine that Patrick expects to get when he comes home. "The Adventure Of The Speckled Band" was written in the late Victorian times; again in this story this is a strong male patriarchy. ...read more.

She decided to go to the greengrocer's as fast as she could. "She rehearsed it several times more", this was when she was rehearsing what to say to "Sam" the greengrocer. When she was at the greengrocers she asked Sam what was best for pudding, he offered her a cheesecake and when receiving it said "Perfect, she said. He loves that". She is doing this to put on a act to Sam to make him feel that she is giving him what is best for him and generally being a loving wife. When she left the greengrocer, "She put on her brightest smile and said, thank you Sam. Goodnight". She does all these little things to put on a act to others that everything is fine. She is actually trying to pretend he is still alive even though he is already dead. She does this to make herself feel better and make sure she doesn't get caught out when the police begin questioning her. Roylott's way of concealing evidence is much more thorough, but he still leaves small clues, and for a detective as good as Sherlock Holmes these clues are enough for him to come to a quick conclusion on what's going on. "Two days ago some repairs were started in the west wing of the building, and my bedroom wall has been pierced". This was Roylott's clever way of getting Helen out of her room and into the room that her sister had previously died in. ...read more.

"I hope you won't blame me too much", Patrick says, this could mean that Patrick is in trouble, or something close to their family has happened, also we could believe that he is having a affair. But Dahl with never let the secret of what Patrick told Mary out in his narrative. "Each daughter can claim an income of �250, in case of marriage." This shows, being the man Roylott is he would do anything for that money, and we can see that all he wants is money, I think the money may calm his anger and make him happier. The money was left from Roylott's deceased wife who left just under �1,100. The money would make him happier because he could kill off Julie and Helen and have a large amount of money. *The fact that Mary is a woman, I think plays a huge role in who gets away with the crime, "For this was her sixth month with child", calm relaxed lady, looking forward to child with her husband, "She knew he didn't want to speak much until the first drink was finished", Mary's acknowledging Patrick and showing her respect for he had been at work and had been working hard. Also her alibi from the Greengrocer backs her up, and also the facts that the policemen knew her as a kind woman, who is harmless and clearly adores Patrick. They seem to put her out of the murder straight away, and decide to go looking for a metal spanner, this shows male patriarchy again as the spanner is used by a man. ...read more.