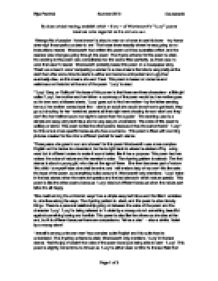 By close critical reading, establish which if any of Wordsworths Lucy poems deserves to be regarded as the odd-one-out.

By close critical reading, establish which - if any - of Wordsworth's "'Lucy'" poems deserves to be regarded as the odd-one-out. 'Strange fits of passion I have known' is about a man on a horse to see his lover. 'my horse drew nigh those paths so dear to me.' The horse knew exactly where he was going so no instructions needed. Wordsworth had written this poem so it has a parallax effect, and the readers view changes going through the poem. The rhyme scheme for this poem is abab, the wording to this poem was complicated but the words fitted perfectly as there was no word that wasn't needed. Wordsworth probably based this poem on a newspaper story. 'Fresh as a rose in June' comparing a woman to a rose means that she is very pretty at the start then after some time its starts to wither and become unimportant and ugly then eventually dies, so this means she won't last. ...read more.

She then becomes part of nature 'this child I to myself take; she shall be mine, and I will make a lady of my own' this line sets the base of the poem, as everything builds around it. Wordsworth only mentions 'Lucy' twice: in the last stanza when the narrator speaks and the last stanza in which nature speaks. This poem is like the other poems because 'Lucy' dies but different because when the nature part talks it is all happy. 'She dwelt among the untrodden ways' has a simple easy technique and the title translates to, she lives along the ways. The rhyming pattern is abab, and this poem is about lonely things. There is a personal relationship going on between the voice of the poem and the character 'Lucy'. 'Lucy' is being referred to 'A violet by a mossy stone' something beautiful against something boring and horrible. This poem is also like the others as she dies at the end, but it is different because there are comparisons: 'fair as a star' - also a simile, 'violet by a mossy stone'. ...read more.

I think that each poem is the odd one out in different ways. In 'A slumber did my spirit seal' it has only two stanzas and unlike the other poems it never reveals the word 'Lucy'. Also in 'Three years she grew in sun and shower' there is a narrator and a voice of nature describing 'Lucy'. 'I travell'd among unknown men' says that 'Lucy' went on a journey and could not see any more, either hinting that she had gone blind or had died. All of the poems in the 'Lucy' compendium end with 'Lucy' dying, getting lost or maybe going blind. 'Lucy', my 'Lucy' I am all alone Why did I leave you? Now that you are gone My poem is nothing like what Wordsworth would have used as these words have no meaning, no rhyme scheme and it would have taken him at least a hundred tries and drafts at making each poem work. 'each word for a purpose not I hope this fits and makes sense'. It only relates because it contains the name or word 'Lucy'. ?? ?? ?? ?? Riya Panchal Summer 2010 Coursework Page 1 of 2 ...read more.