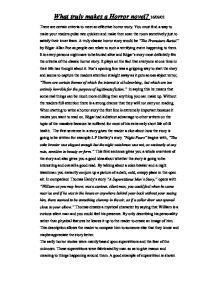 There are certain criteria to meet an effective horror story. You must find a way to make your readers pulse rate quicken and make then scan the room secretively just to satisfy their inner fears. A truly classic horror story would be "The Premature Burial" by Edgar Allan Poe as people can relate to such a terrifying event happening to them. It is every persons nightmare to be buried alive and Edgar's story most definitely fits the criteria of the classic horror story. It plays on the fact that everyone at one time in their life has thought about it. Poe's opening line was a gripping way to start the story and seems to capture the readers attention straight away as it puts across abject terror, "There are certain themes of which the interest is all absorbing, but which are too entirely horrible for the purpose of legitimate fiction," in saying this he means that some real things can be much more chilling than anything you can make up. Without the readers full attention there is a strong chance that they will not carry on reading. ...read more.

which is much more effective than describing him as a man with blood covered horns coming out of his head and a dark red menacing face. Both stories conform well to the criteria for a successful horror story "A Superstitious Mans Story" does not conform to the horror genre because it does not have the right setting or atmosphere. The only horror aspect is the miller moth, which symbolizes Williams's soul. "Night Fears" conforms much more to the horror genre because it has the coke - brazier which symbolizes the night watchman's will to live, the fact that it is dark and cold, the fact that the night watchman is on his own and the mysterious presence of the dark stranger. "A superstitious man's story" does contain many references to superstition and the supernatural, for example the miller moth coming out of Williams mouth, the bell feeling heavy in the sextons hand which symbolises a death in the parish, William's soul seen entering the church and William being spotted by the river before he died which is the exact place where his son died. In Thomas Hardy's day (born 1894) ...read more.

In my opinion the mysterious stranger is portrayed as the Devil. I assume this because he does not show his face, he seems to know much more about the night watchman than he has told him, he appears and disappears and he does not seem bothered or concerned about the night watchman's dead body. I think that "A Superstitious Man's Story" is not as effective simply because it is all based on far fetched superstitions which have now been proven by science as being completely wrong; for example the miller moth flying out of William's mouth symbolizes his soul leaving his body, although I think that it is well written and very mysterious I far prefer "Night Fears" as an effective horror story. The authors intention for writing "A Superstitious Man's Story" was for entertainment value intended to be used for fun while travelling, as it was published in a book named "Tales for Travellers." This type of story is typical of a travellers story as it is short, mysterious and easy to remember this type of story was usually passed on by word of mouth. L.P Hartley's intention was to scare people, but also it may be a portrayal of his emotions, which was also the case for Edgar Allan Poe who was a manic-depressive. What truly makes a Horror novel? 16/09/02 ...read more.