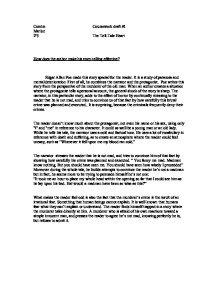 The Tell-Tale Heart How does the author make his story-telling effective? Edgar Allan Poe made this story special for the reader. It is a study of paranoia

Cointre Coursework draft #1 Marion 2�3 The Tell-Tale Heart How does the author make his story-telling effective? Edgar Allan Poe made this story special for the reader. It is a study of paranoia and mental deterioration. First of all, he combines the narrator and the protagonist. Poe writes this story from the perspective of the murderer of the old man. When an author creates a situation where the protagonist tells a personal account, the general shock of the story is sharp. The narrator, in this particular story, adds to the effect of horror by continually stressing to the reader that he is not mad, and tries to convince us of that fact by how carefully this brutal crime was planned and executed.. It is surprising, because the criminals frequently deny their crimes. The reader doesn't know much about the protagonist, not even his name or his s*x, using only "I" and "me" in reference to his character. It could as well be a young man or an old lady. ...read more.

Something that human beings cannot explain. It is well known that humans fear what they can't explain or understand. The reader finds himself trapped in a story where the murderer talks directly at him. A murderer who is afraid of his own reactions toward a simple innocent man, and presses the reader to agree he's not mad, knowing perfectly he is, but refuses to admit it. The murderer's crime is the result of an irrational fear. To the narrator that fear is represented by the old man's eye. Poe describes this eye as being pale blue with a film over it, and resembling that of a vulture. But the narrator doesn't have any reason to fear the old man or his eye. It may be his phobia of the dark side, and eventually drives him into madness. The faith in the evil eye dates back to ancient times, and even today, is fairly common in India and the countries bordering the Mediterranean Sea. ...read more.

Whenever it fell upon me my blood ran cold." Edgar Poe used a flashback. A flashback is literary technique that reveals essential information about a character's past or a past event. It interrupt the current action or chronology of the story to show a scene from the past. By using these flashbacks, the author manages, to express the confusion of the protagonist's mind. Moreover, Poe uses a gothic literary style, where story of darkness may happen in a more everyday setting, such as the quaint house where the protagonist goes mad from the "beating" of his guilt. Poe strips the story of a river of detail as a way to intensify the murderer's obsession with the old man's eye, the heartbeat, and his own claim to sanity. Allan Edgar Poe, wrote a strong story, with an unusual point of view. Following, the criminal in his long way down to madness, and his resistance towards the truth. He's the one with a problem, not the eye. But the reader is supposed to be convince at the end of his speech that he's not mad, but they finally, think he isn't "just nervous" as he says, but mad. ...read more.