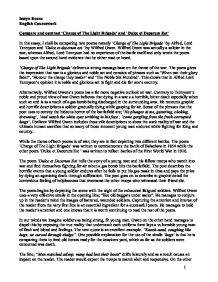 Iestyn Evans English Coursework Compare and contrast 'Charge of The Light Brigade' and 'Dulce et Decorum Est' In this essay, I shall be comparing two poems namely 'Charge of The Light Brigade' by Alfred, Lord Tennyson and 'Dulce et decorum est.' by Wilfred Owen. Wilfred Owen was actually a soldier in the war, whereas Alfred, Lord Tennyson had no experience of the battle itself and only wrote the poem based upon the second hand evidence that he either read or heard. 'Charge of The Light Brigade' delivers a strong message base on the theme of the war. The poem gives the impression that war is a glorious and noble act and consists of phrases such as 'When can their glory fade?', 'Honour the charge they made!' and 'The Noble Six Hundred'. This shows that in Alfred Lord Tennyson's opinion it is noble and glorious act to fight and die for one's country. Alternatively, Wilfred Owens's poem has a far more negative outlook on war. Contrary to Tennyson's noble and proud view of war Owen believes that dying in a war s a horrible, bitter death especially when such an end is as a result of a gas bomb being discharged in the surrounding area. He recounts graphic and horrific descriptions a soldier gradually dying while gasping for air. Some of the phrases that the poet uses to convey the hideous horror of the battlefield are; 'He plunges at me, guttering, choking, drowning', 'And watch the white eyes writhing in his face', 'come gargling from the froth-corrupted lungs'. I believe Wilfred Owen includes these vile descriptions to show the stark reality of war and the ultimate human sacrifice that so many of those innocent young men endured while fighting for King and country.. While the theme of both poems is of war; they are in fact depicting two different battles. The poem 'Charge of The Light Brigade' was written to commemorate the battle of Balaclava in 1854 while the other poem 'Dulce et Decorum Est ' was written to reflect battles of the First World War in 1916. ...read more.

There is use of a simile evident here. The devil is looked at from an evil perspective but it also implies that even the devil is sick of all the sin of war. "Come gargling from the froth-corrupted lungs Bitter as cud Of Vile, incurable sores on innocent tongues" The heaping of adjectives "froth-corrupted", "obscene", "bitter, "vile" and "incurable" follow one after another, leaving us in no doubt as to the never-ending horror that haunted those poor souls. The heaping of adjectives one after another manages to compound the severity and helplessness of the situation. Suddenly the horror comes to a rigid Holt and the reader is addressed as "my friend" and finally Owen mentions the "old lie" which so many English patriots have repeated to themselves over time In fact he expresses those words in Latin; a language no longer spoken. "Dulce et Decorum Est Pro Patria Mori" This translated means "it is sweet and noble to die for one's country", however the question he poses is whether those who preach about the glory of war would utter those words if they had been present and been a part of what Wilfred Owen had seen? Latin, which is not so widely taught in schools these days, was an important subject in the public school education of Owen's day. He possibly makes use of the Latin phrase in order to illustrate how out of touch were so many of those from the old noble classes. They were still advocating the old upper class system of education just as they believed that men on horseback could fight artillery guns. They still extolled the virtue of war old lie that it was sweet and noble to die for one's country from the safety and luxury of their mansions. Both poems have the similar theme of war, however they are both written from totally different perspectives. Wilfred Owen was a soldier in the trenches an actually saw the suffering and endured the hardship. ...read more.

There is also noticeable rhyming in the fourth stanza, "bare, air, there, smoke, broke" Once again in the fourth Stanza where it depicts the cannons surrounding the men. The first five lines are repeated from the third stanza and suddenly we are plunged into a very patriotic atmosphere. "While horses and hero fell They had fought so well Came thro' the jaws of Death Back from the mouth of hell" The four lines drift very smoothly and it creates an image in my head of these heroic men slowly falling off their horses onto the idol littered ground. It's as if it takes an eternity for the men to reach the ground as they fall to their death. Many had been lost but they had fought for their country and gone through hell to pay the price. I believe they could die with pride wearing their bright gold medals and gripping their silver sabres for one last time. In the last stanza a question is used; "When can their glory fade?" The real answer is that their glory will never fade, their patriotic spirits will echo through the ages. Tennyson then tells us! "Honour the charge they made! Honour the Light Brigade" We should appreciate what these men did on behalf of their country. They gave up their lives for their country. Tennyson then closes the poem with honour, "Noble six hundred!" The legendary six hundred is mentioned, one last time. Overall I thoroughly enjoyed studying both poems; they have definitely influenced my view on war. Before reading these poems, I had no real idea what it must have been like for both those the brave young men in the battle of Balaclava or those in the First World War. Through the viewpoint of two very different poets I can truly appreciate the bravery and courageousness of those soldiers. I have also come to the conclusion that there are no real winners in a war and that even those who survived carry either physical or mental scars for the rest of their lives. 1 ...read more.