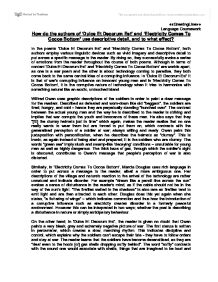 How do the authors of Dulce Et Decorum Est and Electricity Comes To Cocoa Bottom use descriptive detail, and to what effect?

How do the authors of 'Dulce Et Decorum Est' and 'Electricity Comes To Cocoa Bottom' use descriptive detail, and to what effect? In the poems 'Dulce Et Decorum Est' and 'Electricity Comes To Cocoa Bottom', both authors employ various linguistic devices such as vivid imagery and descriptive detail to put across a specific message to the reader. By doing so, they successfully evoke a series of emotions from the reader throughout the course of both poems. Although in terms of content 'Dulce Et Decorum Est' and 'Electricity Comes To Cocoa Bottom' are worlds apart, as one is a war poem and the other is about technology coming to paradise, they both come back to the same central idea of a corrupting influence. In 'Dulce Et Decorum Est' it is that of war's corrupting influence on innocent young men and in 'Electricity Comes To Cocoa Bottom', it is the corruptive nature of technology when it tries to harmonise with something natural like an exotic, untouched island. Wilfred Owen uses graphic descriptions of the soldiers in order to paint a clear message for the readers. Described as defeated and worn-down like old "beggars", the soldiers are tired, hungry, and cold - hence they are perpetually standing "hunched over". The contrast between the actual young man and the way he is described to the reader is striking and implies that war corrupts the youth and innocence of these men. ...read more.

Owen says, "In all my dreams before my helpless sight", which shows the reader how blind the soldiers are, and so isolated from reality, that "dreams" and hallucinations are taking the place of those things they can't see. It also talks about the drowning man to be "guttering, choking, drowning." The use of triplet emphasises how many things occur so fast and at once that the soldiers are unable to react. The reader sympathises with the soldiers' situation and realises their feeling of being trapped and falsely glorified - most soldiers are na�ve men who have been fooled into their own inevitable death. Likewise, in 'Electricity Comes To Cocoa Bottom', nature can do nothing about the 'debut' of electricity but wait and see what happens. In this way, they are also helpless. The poet uses verbs like "waiting" and "watching" to describe the atmosphere of anticipation and excitement when all you can do is wait - therefore rendering them helpless. Douglas comments on nature's behaviour by using personification. She writes, "a breeze coming home from sea held its breath" and "bamboo... stopped its swaying". This is significant as she is trying to say that it too has 'feelings' and should be preserved, unlike what will happen if technology's destructive influence takes control. However, contrasting with the soldiers in 'Dulce Et Decorum Est', Douglas shows that 'all of nature' is perfectly capable to put forward a strong opinion about how they feel about their circumstances - they disapprove. ...read more.

In conclusion, the two poems although very different, come back to the same idea of a corruptive influence. 'Dulce Et Decorum Est' relates the shocking consequences of war, whereas 'Electricity Comes To Cocoa Bottom' talks about nature's response to something new and different. Owen describes dying men with 'glazed eyes' and 'frothed-mouths', whose bodies are racked by a meaningless end. He stresses how the na�ve men have given up their lives running after empty dreams of glory and success. His persuasive and expressive diction completely convince the reader that war in undignified, humiliating and disgusting and that no one could knowingly wish it upon another. Similarly, in 'Electricity Comes To Cocoa Bottom', the author's view of nature and its beauty is shown by her choice of imagery and vivid description. She also shares her view of how ultimately, things like technology don't matter and this is shown when her poem ends with an anti-climax. The children have seen the light and then make their way home in the dark. It is clear that the 'moment' was ephemeral and that it will not be recorded. The descriptive details in the poems are also used contrastingly, in accordance with the mood and tone of the poem, 'Dulce Et Decorum Est' being negative, while 'Electricity Comes To Cocoa Bottom', being more positive and slightly ambiguous. Overall, both authors are able to effectively convey their respective opinions on two distinct corruptive influences by utilising various descriptive details and linguistic features. Shagun Herur Language Coursework ...read more.