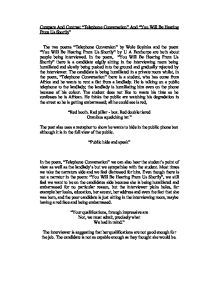 Compare And Contrast "Telephone Conversation" And "You Will Be Hearing From Us Shortly" The two poems "Telephone Conversion" by Wole Soyinka and the poem "You Will Be Hearing From Us Shortly" by U A Fanthorpe are both about people being interviewed. In the poem, "You Will Be Hearing From Us Shortly" there is a candidate edgily sitting in the interviewing room being humiliated and slowly being pushed into the ground and gradually rejected by the interviewer. The candidate is being humiliated in a private room whilst, in the poem, "Telephone Conversation" there is a student, who has come from Africa and he wants to rent a flat from a landlady. He is talking on a public telephone to the landlady; the landlady is humiliating him even on the phone because of his colour. The student does not like to waste his time so he confesses he is African. He thinks the public are watching his degradation in the street so he is getting embarrassed; all he could see is red, "Red booth. Red pillar - box. Red double tiered Omnibus squelching tar." The poet also uses a metaphor to show he wants to hide in the public phone box although it is in the full view of the public. ...read more.

"'Was' Voice, when it came, Lipstick coated, long gold - rolled Cigarette holder piped caught I was foully." The languages of both poems are like an ordinary speech they are colloquial and lines run onto next line. "The price seemed reasonable, location Indifferent. The landlady swore she lived Off premises." . The interviewer in the poem, "You Will Be Hearing From us shortly" uses high classed and superior language, whilst speaking to the candidate she uses the word 'we' and 'us' instead of 'I' throughout the entire poem. The language is rather snobbish. The candidate feels worthless by the harsh and malicious words used by the interviewer. We cannot hear the candidate's part in the poem but we can feel how distressed the candidate must be and we can almost feel the reaction of the candidate. We want to be on the candidate's side because we feel compassionate by the spiteful words the interviewer uses. " Not, we must admit, precisely what We had in mind." As the poem progresses the interviewer becomes more personal and ruder, she becomes more direct and she is patronizing her applicant. She uses formal language to insult the applicant's age. ...read more.