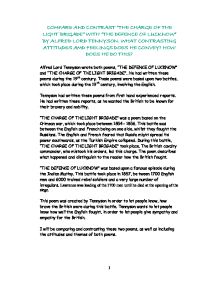 Compare and contrast The Charge of the Light Brigade withThe Defence of Lucknow by Alfred Lord Tennyson - What contrasting attitudes do they convey? How does he do this?

COMPARE AND CONTRAST "THE CHARGE OF THE LIGHT BRIGADE" WITH "THE DEFENCE OF LUCKNOW" BY ALFRED LORD TENNYSON. WHAT CONTRASTING ATTITUDES AMD FEELINGS DOES HE CONVEY? HOW DOES HE DO THIS? Alfred Lord Tennyson wrote both poems, "THE DEFENCE OF LUCKNOW" and "THE CHARGE OF THE LIGHT BRIGADE". He had written these poems during the 19th century. These poems were based upon two battles, which took place during the 19th century, involving the English. Tennyson had written these poems from first hand experienced reports. He had written these reports, as he wanted the British to be known for their bravery and nobility. "THE CHARGE OF THE LIGHT BRIGADE" was a poem based on the Crimean war, which took place between 1854- 1856. This battle was between the English and French being on one side, whilst they fought the Russians. The English and French feared that Russia might spread its power southwards, as the Turkish Empire collapsed. During this battle, "THE CHARGE OF THE LIGHT BRIGADE" took place. The British cavalry commander, who mistook his orders, led this charge. The poem describes what happened and distinguish to the reader how the British fought. "THE DEFENCE OF LUCKNOW" was based upon a famous episode during the Indian Mutiny. This battle took place in 1857, between 1700 English men and 6000 trained rebel soldiers and a very large number of irregulars. ...read more.

Tennyson has included rhythm in the above verses, so that it will make the reader admire the English, as it would sound better and stick to the reader as well as illustrate steadfastness, courage and loyalty of the English. The above verses tell us that the English always did as they were told; they never asked questions about their duties, because they went there to fight due to the loyalty of the flag. 'Voice of the dead whom we loved, our Lawrence the best of the brave: Cold were his brows when we kissed him- we laid him that night in his grave.' (Stanza two- THE DEFENCE OF LUCKNOW) The two verses above show that the English highly admired Lawrence and honoured him as well as showing the English loyalty, as it is said that they went and kissed him although he was dead. It can be seen Tennyson wants to gain sympathy for Lawrence as well as the English and also wants to achieve a high status for them in the view of the readers. r****m and arrogance are two themes, which can be distinguished straightforwardly when there is a look for contrast between the two poems. 'Every man die at his post- and the foe may outlive us at last- Better to fall by the hands that they love, than to fall into theirs!' ...read more.

I believe Tennyson has achieved his goal of making the reader show respect for the English as it has gained my respect for them. This is because he had described the hardships the English faced in both the poems, which will make the reader feel sympathetic towards the English, as well as using many poetry techniques, which will persuade the reader to agree with what he conveys to the reader. Also Tennyson had written in a pro English view and had just described the work of the English and not of the oppositions, which added to the conveying to the reader. In each of the poems, certain styles have been used to get across Tennyson's message of that people should praise and glorify the English as well as admire their work. I feel that the work of Tennyson has been incredible as the ways he has laid out his work and managed to convince myself to support Tennyson's message. As I had been convinced to the messages of Tennyson, it makes me feel as if Tennyson will convey his messages to the other readers. I think that Tennyson has included points in the poems, which weren't necessary to gain the readers support. One point is the r****t remarks that Tennyson had included in "The Defence Of Lucknow", which I believe are absolutely inappropriate, as it isn't the sort of strategy someone would use if they were wanting to gain readers sympathy and respect for the British, in my opinion. BY SAMIUR RAHMAN BY10 I ...read more.