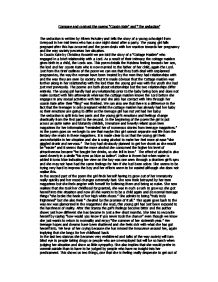 Compare and contrast the poems "Cousin Kate" and "The seduction" The seduction is written by Eileen McAuley and tells the story of a young schoolgirl from Liverpool in her mid teens who has a one night stand after a party. The young girl falls pregnant after this has occurred and the poem deals with her reaction towards her pregnancy and the way society perceives her situation. In Cousin Kate by Christina Rossetti we are told the story of a "Cottage Maiden" who engaged in a brief relationship with a Lord. As a result of their intimacy the cottage maiden gives birth to a child, the Lords son. This poem details the Maidens feeling towards her son, the lord and her cousin Kate who is now married to the father of her child, again the Lord. Just from the Brief outlines of the poem we can see that they both deal with unplanned pregnancies, the way the woman have been treated by the men they had relationships with and the way they are seen by society. But it is made obvious that the Cottage maiden was further along in her relationship with the lord than the young girl was with the youth she had just met previously. The poems are both about relationships but the two relationships differ entirely. The young girl hardly had any relationship prior to the baby being born and does not make contact with him afterwards whereas the cottage maiden knows the Lord before she engages in any sexual activities with him and she also has contact with him through her cousin Kate after their "fling" was finished. We can also see that there is a difference in the fact that the teenager is only pregnant whilst the cottage maiden has already had her baby so their emotions are going to differ as the teenage girl has not yet had her baby. ...read more.

The docks are typically associated with prostitutes, which suggests he doesn't think anymore of her than a cheap prostitute. This also comes to our attention when in the last line of the second stanza he "muttered little slag." This lets us no without a doubt that he had no respect for her or had no intention of becoming involved in any kind of relationship with her past that night. He comes across as quite cheap from the way the author writes, "leather jacket creaking madly" Expensive leather is extremely quiet and soft, the fact that his jacket was creaking implies it was not of an expensive nature. He also spits in the river, trying to impress her but really just showing his vulgarity. He had obviously planned the night, which makes him seem quite seedy and perverted, he seems to be in control of the night, he sat down, he led her, and he'd bought her more drinks. He seems to be the source of intoxicated state as he had been buying her drinks all night and "he handed her the vodka" at the river. The fact that he thinks he need to get her drunk before she will have any contact with him shows that maybe he doesn't really think that highly of himself anyway. The conversation between the couple is very one dimensional and shows the boy to be quite selfish as he only talks about subjects which concern or interest him and shows no interest in any subject relating or relevant to the young girl. The way the author describes how he spends his free time also gives us an insight into what type of boy the young girl is involved with. He says he spends most afternoons down by the river whilst he should be in school so the fact that he's a truant makes him seem less academic and clever and more juvenile. ...read more.

The Cottage maiden comes across as a stronger, more realistic woman with a better attitude towards life than the young girl who wallows in self-pity and immaturity instead of trying to deal with the situation in hand. The male characters have some similar attributes. They both have no interest in the women once they have succeeded in getting what they want, They are both quite sad characters The Lord feels he needs to buy peoples love and the youth tries to impress the young girl in the most bizarre of ways. We learn more about the Lord than we do about the youth, as the girl does not have contact with him after she spent that one night with him but the lord continues to be mentioned in Cousin Kate until the end. We do not know whether the young boy knows of the girl's pregnancy but we are sure that the Lord knows of the cottage maidens this proves that he is very cold hearted, not to make any attempt to see his son. They both use the women for sex and the both come across as devious and scheming. There is the obvious difference between the two male characters in that the Lord is extremely rich and we get the impression that the boy is not that well off. All in all the poems differ greatly in certain areas including the female characters, the point of view, the reactions and the structure but also share a lot of similarities in the male characters, the language used, imagery, the basic story lines and the settings. I preferred the seduction to Cousin Kate because of the language used and the way the girls emotions are put across, the author uses powerful techniques to get vast emotions into words, like onomatopoeia "sobbed" metaphors "sliver stream of traffic" and similes "eyes as blue as iodine." Cousin Kate did not show such a wide array of techniques but I still enjoyed it and thought its more constant rhyme scheme was a good idea. ...read more.