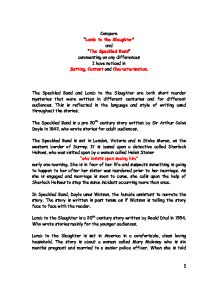 Compare &quot;Lamb to the Slaughter&quot; and &quot;The Speckled Band&quot; commenting on any differences I have noticed in Setting, Content and Characterisation.

Compare "Lamb to the Slaughter" and "The Speckled Band" commenting on any differences I have noticed in Setting, Content and Characterisation. The Speckled Band and Lamb to the Slaughter are both short murder mysteries that were written in different centuries and for different audiences. This is reflected in the language and style of writing used throughout the stories. The Speckled Band is a pre 20th century story written by Sir Arthur Colon Doyle in 1842, who wrote stories for adult audiences. The Speckled Band is set in London, Victoria and in Stoke Moran, on the western border of Surrey. It is based upon a detective called Sherlock Holmes, who was visited upon by a woman called Helen Stoner "who insists upon seeing him" early one morning. She is in fear of her life and suspects something is going to happen to her after her sister was murdered prior to her marriage. As she is engaged and marriage is soon to come, she calls upon the help of Sherlock Holmes to stop the same incident occurring more than once. In Speckled Band, Doyle uses Watson, the humble assistant to narrate the story. The story is written in past tense as if Watson is telling the story face to face with the reader. Lamb to the Slaughter is a 20th century story written by Roald Dhal in 1954. Who wrote stories mainly for the younger audiences. Lamb to the Slaughter is set in America in a comfortable, clean loving household. The story is about a woman called Mary Maloney who is six months pregnant and married to a senior police officer. ...read more.

Speckled Band deals with the investigation whereas Lamb to the Slaughter deals with the crime itself. It illustrates that the times have changed. During the Victorian times, many criminal offences took place, which meant a lot of the crime was not solved. As Speckled Band was written in the Victorian times it was a change for the readers to read about a crime that was to be solved. Whereas Lamb to the Slaughter takes us on a journey of Mary Maloney hiding the truth. How na�ve the police officers are and the way they handle the investigation. Lamb to the Slaughter deals with crime in people's homes. In contrast, it shows how attitudes to crime have changed. Holmes and Jack Noonan are two contrasting detectives. Holmes is a thorough detective and pays a lot of attention to the crime and its surroundings. He has also never met the family before so it does not affect the way he investigates the case. Holmes is a more determined and a realistic officer and enjoys his job. "My dear fellow, I would not miss it for anything." Whereas Jack Noonan is, the total opposite to Holmes. He knew Mary and Patrick Maloney from the beginning. This may have affected the case as he knew both of the characters. Noonan could not see through Mary as he could not see any reason for murder. Jack doesn't have passion for his job and doesn't give it as much thought as Sherlock. "It's the old story," The styles of writing are often fixed by when they are written, attitudes in society at the time and cultural influences. ...read more.

As the story ends the reader is left to think about what will happen to Helen Stoner but Sherlock Holmes thought are left clear to the reader. However in Lamb to the Slaughter the ending is somewhat different. "And in the other room, Mary Maloney began to giggle." This ending leaves the reader to ponder about what happens next. It leaves an open ending, where the reader can make his or her own mind up. It is a surprise ending, as you would not think that was to happen. Was this intentional or does it show how people can get away with murder? Even though both stories were murder mysteries, I preferred Lamb to the Slaughter. This was because it was different to read about a murderer's attempt to outwit the police rather then to be caught by them. The style of writing and language also had an effect on my choice. This was because I found it easier to understand what was going on in Lamb to the Slaughter than it was in The Speckled Band. I suppose that if I were in the 19th century I would have preferred to read Doyle's story because it solved the mystery, which was unusual in those days. Many differences where noted when both stories where compared. It shows how writers create stories that will appeal to the audience. The stories structure, content and language show how attitudes toward murder and crime have changed over time. Doyle solves the mystery while Dhal leaves it hanging in he air. For pre 20th century readers this was common for the story's crime to be solved but how would they react if they were to read Dhals' modern approach an unsolved mystery? 1 1 ...read more.