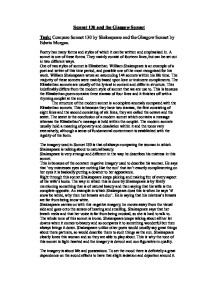 Compare Sonnet 130 by Shakespeare and the Glasgow Sonnet by Edwin Morgan.

Sonnet 130 and the Glasgow Sonnet Task: Compare Sonnet 130 by Shakespeare and the Glasgow Sonnet by Edwin Morgan. Poetry has many forms and styles of which it can be written and emphasised in. A sonnet is one of these forms. They mainly consist of fourteen lines, but can be set out in two different ways. One of two styles of sonnet is Elizabethan. William Shakespeare is an example of a poet and writer of this time period, and possible one of the most recognised for his work. William Shakespeare wrote an astounding 144 sonnets within his life time. The majority of these sonnets were mainly based upon love or insincere compliments. The Elizabethan sonnets are usually of the lyrical in content and differ in structure. This indefinably differs from the modern style of sonnet that we are use to. This is because the Elizabethan poem contains three stanzas of four lines and it finishes off with a rhyming couplet at the end. The structure of the modern sonnet is a complete anomaly compared with the Elizabethan sonnets. ...read more.

The whole tone of this sonnet is ironic. Shakespeare keeps talking about all her let downs when it comes to beauty and so compares it to something wonderful but then always brings it down. Shakespeare unlike other poets would usually say great things about there partners, so would describe them to such things as the sun. Shakespeare clearly loves this woman and so they are able to play about. This is why the tone of this sonnet is light-hearted and the imagery is devout and non-figurative in quality. The imagery is about life and possessions. To set the mood there is definitely a great dependence on the sound effects to have that slight isolation and dejection around it. In this sonnet the octave talks about the overall decay of this area and the way everything around it seems to be decaying away. Then when we go onto the sestet it talks about the life of someone living in this area. This is where we find out about the harsh realities that behold this place, with unemployment and basically a really low standard of living. ...read more.

Shakespeare uses light hearted comedy to show his love towards his partner without lying. The Glasgow sonnet really does hold a serious message which the poet is trying to get across to the people out there willing to listen. He feels that people have been ignoring these situations and the problems have become increasingly worse. The content of this poem has given a paradoxical look and it is all a part of social realism. I feel that Sonnet 130 is very effective in the way Shakespeare puts his opinion across about his partner. The humour of the sonnet brings a more appealing feel to it. Although the problem with the sonnet is that message isn't clear to see straight away, you have to look at the sonnet in more depth to see what message Shakespeare is trying to get across. The Glasgow Sonnet has a very serious message to it and the way the writer uses metaphors and similes to describe the area that people have to suffer living in, is very effective and makes the reader think about the realities of life. ?? ?? ?? ?? ...read more.