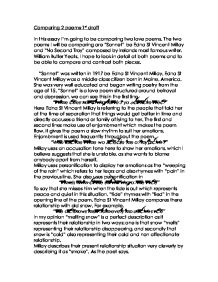 Comparing 2 poems-1st draft In this essay I'm going to be comparing two love poems. The two poems I will be comparing are "Sonnet" be Edna St Vincent Millay and "No Second Troy" composed by Irelands most famous writer, William Butler Yeats. I hope to look in detail at both poems and to be able to compare and contrast both pieces. "Sonnet" was written in 1917 be Edna St Vincent Millay. Edna St Vincent Millay was a middle class citizen born in Maine, America. She was very well educated and began writing poetry from the age of 15. "Sonnet" is a love poem structured around betrayal and depression, we can see this in the first line "Time does not bring relief; you all have lied" Here Edna St Vincent Millay is referring to the people that told her at the time of separation that things would get better in time and directly accuses a friend or family of lying to her. The first and second lines make use of enjambment which makes the poem flow, it gives the poem a slow rhythm to suit her emotions. Enjambment is used frequently throughout the poem. "Who told me time would ease me of my pain!" Millay uses an accusation tone here to show her emotions, which I believe suggests that she is unstable, as she wants to blame anybody apart from herself. ...read more.

Gonnes' obsession with the concept of Irish independence was much greater than Yeats'. "No Second Troy" is a love poem built around the structure of love, violence and depression. The title suggests that Yeats compares Maude Gonne with Helen of Troy. The Poem begins with a rhetorical question "Why should I blame her that she filled my days with misery" I think he uses the rhetorical question here to tell the readers that Gonne wouldn't care if she had filled his "days with misery" and that all she cares about is Irish independence. Referring to one of my earlier points William Butler Yeats believes in what Gonne is fighting for but not the way she's doing it. As he writes, "Or that she would of late Have taught most ignorant men most violent ways" William Butler Yeats tells the reader that she is to blame for the IRA, when he says "Taught to ignorant men most violent ways" this could mean that she uses her beauty to entice people in to fighting for her, just like Helen of Troy. William Butler Yeats gives us his opinion on the IRA quite cleverly when he mentions violence, although he doesn't mention the IRA you still get his opinion, this is done very cleverly by Yeats. ...read more.

An example of hyperbole from "No Second Troy" is "That nobleness made simple as fire". Although there are many comparisons between both poems there are also many differences. For example "No Second Troy" uses rhetorical questions where Millay' "Sonnet" doesn't. I think rhetorical questions play a large part in Yeats' poem as it brings more emotion to the poem. A good example of this is "WHY should I blame her that she filled my days with misery?". An other difference is that Millay uses an oxymoron in "Sonnet". In my opinion a good example of an oxymoron from "Sonnet" is "But last years bitter loving must remain". I think the oxymoron shows strong emphasis on the ex-relationship status and gives us an insight on what the relationship used to be like. A big difference in both poems is the flow of the poems. This is mostly effected by the enjembment's used and the rhyming scheme. "Sonnet" doesn't follow any rhyming scheme where as "No Second Troy" does. This has a large impact on the flow of both poems which are completely different. "Sonnet" flows much faster than "No Second Troy" making it much better to read. "Sonnet" uses repetition of the the words "Last year's" for emphasis on "Last year's relationship" where as "No second Troy" has no repetition" 2,340 words: No conclusion or link. Steffan Richards ...read more.