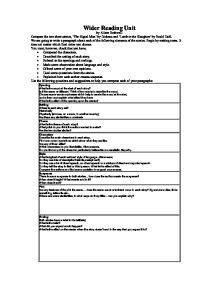 Compare the two short stories, 'The Signal Man' by Dickens and 'Lamb to the Slaughter' by Roald Dahl.

Wider Reading Unit by Alison Rothwell Compare the two short stories, 'The Signal Man' by Dickens and 'Lamb to the Slaughter' by Roald Dahl. We are going to write a paragraph about each of the following elements of the stories. Begin by making notes. It does not matter which final order you choose. You must, however, check that you have; * Compared the characters. * Described the setting of each story. * Refered to the openings and endings. * Made some observation about language and style. * Offered some of your own opinions. * Used some quotations from the stories. * Explained how each author creates suspense. Use the following questions and suggestions to help you compose each of your paragraphs: Opening What is the mood at the start of each story? Is it the same or different. Think of two words to describe the mood. Choose some words or phrases which help to create the mood at the start, quote them and explain what effect they have. What is the effect of the opening upon the reader? Setting Where is each story set? Historically Physically (indoors, on a moor, in another country) Are there any similarities or contrasts Theme What is the theme of each story? What point do you think the author wanted to make? Are the two stories similar? ...read more.

[he]... walked along a path of flowers". Dickens contrasts the "daily drudgery and misery" of his education after Clara's remarriage; David is betrayed by his own nervousness in front of the dominating Murdstones, upsetting his mother and lowering his self-esteem - "the more stupid I get". This negative reaction again shows Dickens' encouragement of a very different form of education. David is not "stupid" and it is only the strict and stifling circumstances that make him feel this way. Dickens encourages the reader to feel that if the Murdstones were more liberal and generous in their education of David, the results would be significantly different. Dickens' views on education are conveyed best through the contrast he draws between Betsey Trotwood's firmness and Mr Murdstone's. Murdstone's firmness overwhelms David, whereas Betsey's firmness lays a sound moral foundation for his freedom - "never... be mean in anything; never be false; never be cruel. Avoid these three vices... and I can always be hopeful of you". David's epic journey from London to Dover and his emancipation from the imprisonment of the Murdstone and Grinby factory shows the consequences of these educational methods in a more literal way; David is literally escaping the moral, physical and financial imprisonment of the factory for the freedom to explore and develop his interests. ...read more.

That was one of the sentences from 'Jane Eyre'. This is one of the longest sentences from 'kes': 'He slashed the stick in front of their chests, making the air swish in its wake, then he turned around and leaned straight-armed on the mantelshelf, shaking his head. The boys winked at each other. That was one of the longest senances in 'kes' and its half the size of a normal one in 'Jane Eyre', it also used a lot less comers, and it didn't have any colons or semi-colons in it either. The words were shorter and the sentences sounded more modern too. As you have read, there are many similarities and differences between the short story and the novel. These stories show how the killing of humans can become very casual and easy. Even though the two stories are very different, they have some basis in reality. They have many of the same themes, such as the desire of humans to kill. In the novel, Jack was the main predator and in the short story, Zaroff was the main predator. The main idea these stories try to show is the importance of human rights which has been turned into a world law by the UN. ...read more.