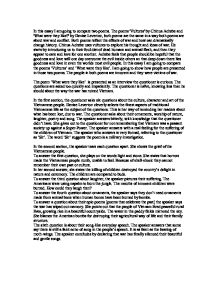 Compare 'Vultures' by Chinua Achebe and 'What were they like?' by Denise Levertov

In this essay I am going to compare two poems. The poems 'Vultures' by Chinua Achebe and 'What were they like?' by Denise Levertov, both poems are the same in a way both poems are about war and conflict. Both poems reflect the effects of war and how can dramatically change history. Chinua Achebe uses vultures to explore his thought and ideas of war. He starts by introducing us to their foul diet of dead humans and animal flesh, and then they appear to care and love for one another. Achebe feels that people should be hopeful that the goodness and love will one day overcome the evil inside others an that deep down there lies goodness and love in even the worlds most evil people. In this essay I am going to compare the poems 'Vultures' and 'What were they like'. ...read more.

The speaker answers with a real feeling for the suffering of the children of Vietnam. The speaker who answers is very formal, referring to the questioner as 'Sir'. The word 'Sir' suggests the poem is a military investigation. In the second section, the speaker tears each question apart. She shows the grief of the Vietnamese people. To answer the first question, she plays on the words light and stone. She states that horrors made the Vietnamese people numb, unable to feel. Because of shell-shock they cannot remember their own past or culture. In her second answer, she states the killing of children destroyed the country's delight in nature and ceremony. The children are compared to buds. To answer the third question about laughter, the speaker pictures their suffering. The Americans were using napalm to burn the jungle. The mouths of innocent children were burned. ...read more.

Each is marked by an indented line rather than a new stanza, perhaps to emphasise the logical flow of ideas and there is minimal punctuation. The concentration camp Commandant cannot escape the evil deeds he has spent the day performing - 'the fumes of human roast [cling] rebelliously to his hairy nostrils' The word 'roast' makes us think of food, so it is doubly repulsive that he then buys 'chocolate' for his 'tender' child (or children) on the way home. The people in 'vultures' are represented as not worthy of being human, the Aryan race is the superior race therefore the Commandant goes and kills thousands of Jews just because they are form a different race. Similar in the poem 'What were they like' America thought they could start a war against Vietnam and win it because most of the people are not peasants and farmers instead they didn't but destroyed whole Vietnam. ?? ?? ?? ?? ...read more.