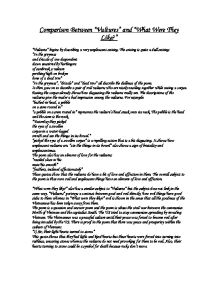 Comparison Between "Vultures" and "What Were They Like?" "Vultures" begins by describing a very unpleasant setting. The setting is quite a dull setting: "In the greyness and drizzle of one despondent dawn unstirred by harbingers of sunbreak a vulture perching high on broken bone of a dead tree" "In the greyness", "drizzle" and "dead tree" all describe the dullness of the poem. It then goes on to describe a pair of evil vultures who are nicely nestling together while eating a corpse. Eating the corpse already shows how disgusting the vultures really are. The descriptions of the vultures give the reader a bad impression among the vultures. For example: "bashed-in head, a pebble on a stem rooted in" "a pebble on a stem rooted in" represents the vulture's head stuck onto its neck. The pebble is the head and the stem is the neck. "Yesterday they picked the eyes of a swollen corpse in a water-logged trench and ate the things in its bowel." ...read more.

Also, their hearts turning to stone could be a symbol for death because rocks don't move. The poem takes a question and puts emphasis on something unpleasant which is like "Vultures" because emphasis is also put in the poem to make something more unpleasant. The culture was also, obviously, unrespected by the quote: "It is not remembered". This shows that nothing is remembered of the culture itself and the people of the culture. "Perhaps" also shows that nothing is remembered of the culture. So, "What were they like?" is similar to "Vultures" in the way that the poems both show that evil things have good sides to them. Even though these are shown in different ways, they both have the same meaning. The language in "Vultures" is not very complicated and the words are not very long. Also he uses negative adjectives to portray the evilness of the vultures. For example: bashed-in, dead, dump, broken. All these adjectives emphasize the evilness of the vultures. ...read more.

In the poem there is also "...". These mark the end of one section and the beginning of another. The Structure in "What were they like?" is a question and answer structure whereas "Vultures" is a normal verse poem but free verse instead. At the beginning of each answer or question there is a number to represent the answer to what question but "Vultures" has a different structure to "What were they like?". There is no space in between lines which is similar to "Vultures" in the way that "Vultures" does not leave spaces in between lines. After reading "Vultures" I felt a bit positive knowing that evil things have loving sides to them. Again, it is ambiguous on what the poem was meant to end like but I think that the poem started in a negative way and ended in a negative way. "What were they like?" also starts in a negative way and ends in one which is like "Vultures". "Who can say? It is silent now." This quote shows that the ending is negative. "It is silent now" means that the culture is now dead so no-one can tell. ...read more.