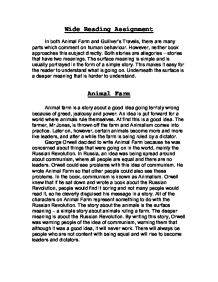 Wide Reading Assignment In both Animal Farm and Gulliver's Travels, there are many parts which comment on human behaviour. However, neither book approaches this subject directly. Both stories are allegories - stories that have two meanings. The surface meaning is simple and is usually portrayed in the form of a simple story. This makes it easy for the reader to understand what is going on. Underneath the surface is a deeper meaning that is harder to understand. Animal Farm Animal farm is a story about a good idea going terribly wrong because of greed, jealousy and power. An idea is put forward for a world where animals rule themselves. At first this is a good idea. The farmer, Mr Jones, is thrown off the farm and Animalism comes into practice. Later on, however, certain animals become more and more like leaders, and after a while the farm is being ruled by a dictator. George Orwell decided to write Animal Farm because he was concerned about things that were going on in the world, mainly the Russian Revolution. In Russia, an idea was being spread around about communism, where all people are equal and there are no leaders. Orwell could see problems with this idea of communism. He wrote Animal Farm so that other people could also see these problems. In the book, communism is known as Animalism. Orwell knew that if he sat down and wrote a book about the Russian Revolution, people would find it boring and not many people would read it, so he cleverly disguised his message in a story. All of the characters on Animal Farm represent something to do with the Russian Revolution. The story about the animals is the surface meaning - a simple story about animals ruling a farm. The deeper meaning is about the Russian Revolution. By writing this story, Orwell was warning people of the idea of communism, warning them that although it was a good idea, it will never work. ...read more.

The criticism of England was so bad that Swift did not put his own name to the book. The completed novel was found on the ground outside the door of a publisher. The book was in the form of a travel book, where the narrator, Lemuel Gulliver, claimed to be writing about his journeys to "several remote nations of the world". Swift mocked and ridiculed the people and societies that he found in those make-believe, distant places, but what he was really doing was criticising England in the 1720s. From the very beginning it is easy to see that the book was not written in the twentieth century. The language is quite different, quite formal. The sentences are very long and Swift often goes into lots of detail about the tiniest things. There are also clues in the writing which tell us that this is not a modern piece of writing. For example, when Gulliver sets off on his first journey, he writes that "Twelve of our crew were dead by immoderate labour and ill food. The rest were in a very weak condition". Lilliput The ship is caught in a storm and destroyed. Gulliver manages to get onto shore, but collapses on the beach. When he awakes, he finds that he is tied down with lots of tiny ropes. "I attempted to rise, but was not able to stir for, as I happened to be on my back, I found my arms and legs were strongly fastened on each side to the ground; and my hair, which was long and thick, tied down in the same manner". He discovers that there are lots of little people standing around him. They are very shocked at first, and think that he is a monster, but after a while, they construct a vessel to carry him to the main city of Lilliput. Gulliver meets the Emperor of Lilliput: "His Imperial Majesty spoke often to me, and I returned answers, but neither of us could understand a syllable". ...read more.

Other than that, there is no description of the people of Brobdingnag. Gulliver's departure from Brobdingnag is quite peculiar and relies completely on chance. He is carried about the country in a small box. Gulliver pretends to be ill and says that he needs some fresh air. The page carrying the box sets it down on some rocks and then goes off wandering. Then, an eagle swoops down and grabs the box in its beak. It carries Gulliver across the sea, but then is shot. Gulliver's box falls down into the sea. By chance, he is discovered by an English ship, and is hoisted up onto the deck. Gulliver forgets that the people are of his own size, and tells one of the crew to put his finger in the ring at the top of the box and pull the lid off. Again, the crew thinks him mad, but again Gulliver has little objects that prove that he is sane. This time, he has a comb and a ring. Once Gulliver is back home, everything seems strange. He imagines himself to be in Lilliput again, where the house and people are tiny, for he is used to the size of the inhabitants of Brobdingnag. He shouts instead of talks, thinking that the people can still not hear him in his normal voice. He comments that his wife and children have starved themselves to nothing, when in reality they are well fed. Gulliver cannot see people if they kneel or sit down, "having been so long used to stand with my head and eyes erect to above sixty foot". His wife asks him not to go to sea any more, but Gulliver knows that if another opportunity comes his way, he will take it. Laputa Gulliver had not been at home more than ten days when a captain came to see him about going to sea once more. Gulliver was offered the opportunity to have a role on the ship which was equal to that of the captain, and double his normal wage. ...read more.