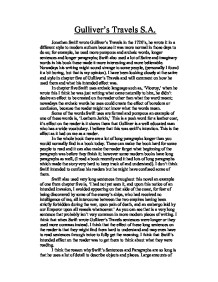 Gulliver's Travels S.A. Jonathan Swift wrote Gulliver's Travels in the 1720's, he wrote it in a different style to modern authors because it was more normal in those days to do so; for example, he used more pompous and archaic words, longer sentences and longer paragraphs; Swift also used a lot of Satire and imaginary words in his book these made it more interesting and more believable. Nowadays his writing might sound strange to some people, (personally I found it a bit boring, but that is my opinion). I have been looking closely at the satire and style in chapter five of Gulliver's Travels and will comment on how he used them and what his intended effect was. In chapter five Swift uses archaic language such as, 'Viceroy,' when he wrote this I think he was just writing what came naturally to him, he didn't desire an effect to be created on the reader other than what the word meant; nowadays the archaic words he uses could create the effect of boredom or confusion, because the reader might not know what the words mean. ...read more.

Swift also used very long sentences throughout this novel an example of one from chapter five is, 'I had not yet seen it, and upon this notice of an intended invasion, I avoided appearing on that side of the coast, for fear of being discovered by some of the enemy's ships, who had received no intelligence of me, all intercourse between the two empires having been strictly forbidden during the war, upon pain of death, and an embargo laid by our Emperor upon all vessels whatsoever.' As you can see that is a very long sentence that probably isn't very common in more modern pieces of writing. I think that when Swift wrote Gulliver's Travels sentences were longer or they used more commas instead. I think that the effect of these long sentences on the reader is that they might find them hard to understand and may even have to read sentences through twice to fully get the meaning. I think that Swift's intended effect on the reader was to get them to think about what they were reading. ...read more.

I think that his use of satire makes the book amusing an fun to read. Some of the satire he uses isn't meant to be funny though, it is there to take the micky out of something or someone. Swift's use of language throughout the book Gulliver's Travels is old fashioned and different and I don't think an audience of today would find it as interesting as Swift intended it to be; this isn't a bad thing though because if he wrote the book for an audience of the 1720's and it is still being read now it shows that he wrote a good book! Also I think that the audience of the 1720's would have appreciated it more, because all the effects Swift tried to create with different techniques would of been created on them, because they are the people the effect was intended to be made on, they would of understood the pompous words; whereas an audience today wouldn't get the desired effect because it wasn't intended for them, and they would probably find bits of the book confusing. ...read more.