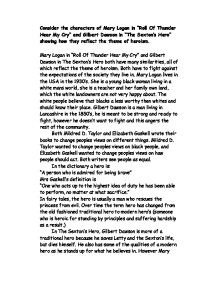 Consider the characters of Mary Logan in &quot;Roll Of Thunder Hear My Cry&quot; and Gilbert Dawson in &quot;The Sexton's Hero&quot; showing how they reflect the theme of heroism

She tries to persuade the black community to shop elsewhere: "she spoke of finding another store to patronise." She does this because the Wallaces, who run the local store, are suspected of burning a black family. Mary Logan teaches her students about slavery even though she is not allowed to. " To make matters worse her lesson for the day was slavery" She wants her students to know the truth about their history. She even covers an offensive page in a black textbook. "Then she took the paper and placed it over the glue." She fights against white expectations because she believes that one day there will be freedom, and she wants her children to live in a fairer society. Mary Logan speaks out for the share-croppers who don't have a voice. She is fighting for justice. Both writers show the difficulties that the characters face because they go against the expectations of the community. In "The Sextons Hero" Gilbert Dawson is treated very badly by the community, after he refuses to fight. People thought there was something wrong with him. The called him a "monkey or a foreigner," and drove him out of the community. Letty, who is supposed to be in love with Gilbert, tries to blackmail him into fighting the sexton. When he would not fight, Letty was spiteful and eventually left Gilbert for the Sexton. ...read more.

His Bible symbolises his integrity, he lives by it. "There were many a text in the Gospel, marked broad with his carpenter's pencil which more that bore him out in his refusal to fight." He believes so much in what it says, that he is willing to sacrifice the girl he loves, to abide by it. In "Roll Of Thunder Hear My Cry", religion also plays an important role in peoples lives, though not as much as in 'The Sextons Hero'. For the black community, the Christian church is seen as the corner stone of their lives. It is referred to as part of everyday life. Great Faith church is where the Logans and the rest of the black community worship and assemble. The annual revival : "ran for seven days and was a occasion everyone looked forward to." It shows the community spirit as everyone got together. Mary Logan's values of equality and justice spring from her simple Christian foundation. Both Mary Logan and Gilbert Dawson are committed to their duty and both have to make sacrifices to fulfil that duty. Gilbert Dawson makes a bigger sacrifice than Mary Logan as he sacrifices his life to save that of Letty and the Sexton. Gilbert is a traditional hero as he saves the day. However Mary Logan is more of a modern hero because she stands by her principles. Ultimately, both Gilbert Dawson and Mary Logan reflect the theme of heroism as they both stand up for what they believe in. ...read more.