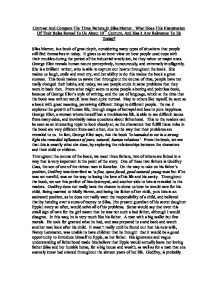 Contrast And Compare The Three Fathers In Silas Marner. What Does This Examination Of Their Roles Reveal To Us About 19th Century, And Has it Any Relevance To Us Today?

Contrast And Compare The Three Fathers In Silas Marner. What Does This Examination Of Their Roles Reveal To Us About 19th Century, And Has it Any Relevance To Us Today? Silas Marner, is a book of great depth, considering many types of situations that people still find themselves in today. It gives us an inner view on how people used cope with their troubles during the period of the industrial revolution, be they minor or major ones. George Eliot reveals human nature perceptively, humourously, and extremely intelligently. She is a brilliant writer, who is able to capture our hearts throughout the book. She makes us laugh, smile and even cry, and her ability to do this makes the book a great success. This book makes us aware that throughout the course of time, people have not really changed their habits, and today, we see people stuck in same problems that they were in back then. From what might seem to some people a boring and pointless book, because of George Eliot's style of writing, and the use of language, which at the time that the book was written would have been quite normal. May to others like myself, be seen as a book with great meaning, perceiving different things to different people. To me it explores the growth of human life, through stages of betrayal and loss to pure happiness. George Eliot, a woman whom herself had a troublesome life, is able to see difficult issues from many sides, and inevitably raises questions about fatherhood. This to the readers can be seen as an interesting topic to look closely at, as the characters that fulfill these roles in the book are very different from each other, due to the way that their problems are revealed to us. In fact, George Eliot says, that the book 'is intended to set in a strong light the remedial influences of pure, natural, human relations'. ...read more.

God gave her to me because you turned your back upon her, and He looks upon her as mine; you've no right to her!" Silas really opens his heart during this chapter, and it is here that we really see the change in his personality. He has become a human being who has real feelings towards people. In chapter fourteen, we see Eliot explain the change that is seen in Silas, since the arrival of Eppie. She says, "as the child's memory was growing into knowledge, his mind was growing into memory: as her life unfolded, his soul, long stupified in a cold narrow prison, was unfolding too, and trembling gradually into full consciousness" In this chapter, Silas's character really touches my heart, when he says "How'll she feel just the same for me as she does now, when we eat o'the same bit, and drink o'the same cup, and think o'the same thinks from one day's end to the other? Just the same ? That's idle talk. You'd cut us I'two." This short but effective line is so precious. To me, Silas is saying, that even though it is only the two of them, they are together as one, and nothing would be able to make them part! At the end of the book, we see that Silas restores his faith in god, and that what ever would happen, his faith would always be the pillar of strength. Throughout the book, we learn that the roles of parents are very important. A child brought up by surrounded by love ends up being able to give out love easily. Each of the fathers within the book give us a lot of information about the way things worked during this period of time. We learn that people would have been very judgemental of you, if you ever gave them a reason to be. For example, at the beginning of the book, we see that the people of Raveloe were unwilling to include Marner into their lives, because he didn't attend church, or because he didn't socialise much by going to the Rainbow every evening. ...read more.

These lines sum up the meaning of the whole book, and they are so true as anybody who reads the book can tell. Both Silas and Godfey come to realise this luckily before it was too late. The Squire on the other hand was completely blind to this. Maybe because his children were just there, and that he didn't have to struggle to get them, and was unable to appreciate their presence. This just proves that the harder you work for something, the more rewarding it is in the long run. From this book, we also learn that one of the greatest gifts in life is the presence of a child, and throughout the book, we see how children have changed everyones lives. At the end of chapter fourteen, Eliot writes, that in times of anger and unhappiness, being around a child can help you escape from the outside world. It says, " In the old days when there were angels who came and took men by the hand and led the away from the city of destruction. We see no white-winged angels now. But yet men are led away from threatening destructions; a hand is put into theirs, which leads them forth gently towards a calm and bright land, so that they look no more backward; and the hand may be a little child's." One of the main points that I think comes out of this book, is one person's ability to change another person's life. This is a fantastic thing to achieve and the way in which a small child like Eppie manages to make such a big difference to Silas is great. The story's end presents us with a moralistic conclusion. The bad die unhappily, and the good live happily. This relates very much to a "Fairy Tale" ending where everyone lives happily ever after, this is something that I never would have expected from this book, but it goes to show that"Fairy Tales" don't just happen in children's books! Word Count : 3957 Ruchi Malhotra 10H ...read more.