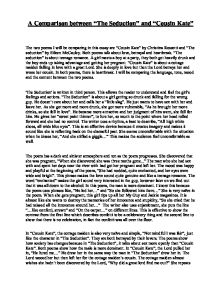 Cousin Kate and The Seduction

A Comparison between "The Seduction" and "Cousin Kate" The two poems I will be comparing in this essay are "Cousin Kate" by Christina Rossetti and "The seduction" by Eileen McCauley. Both poems talk about love, betrayal and heartbreak. "The seduction" is about teenage romance. A girl meets a boy at a party, they both get heavily drunk and the boy ends up taking advantage and getting her pregnant. "Cousin Kate" is about a cottage maiden falling in love with a great Lord. She is deeply in love but then the Lord betrays her and woos her cousin. In both poems, there is heartbreak. I will be comparing the language, tone, mood and the content between the two poems. 'The Seduction' is written in third person. This allows the reader to understand and feel the girl's feelings and actions. "The Seduction" is about a girl getting so drunk and falling for the wrong guy. He doesn't care about her and calls her a "little slag". He just wants to have s*x with her and leave her. As she got more and more drunk, she got more vulnerable, "As he brought her more drinks, so she fell in love". He became more attractive and her judgment of him went, she fell for him. He gives her "sweet paint thinner", to lure her, so much to the point where her head rolled forward and she had no control. ...read more.

The tone, like in the other poem is happy and exciting at first, "Why did a great lord find me out To fill my heart with care..." this shows she had feelings for him and was in love, it was happy and romantic. However, in the second paragraph the tone and atmosphere turns dark and cold, this is when the audience realizes that the Lord is a player, he wore her like "a silken knot" and changed her "like a glove". The use of oxymorons, "...shameless shameful..." imply that even though she feels ashamed, there is a part of her that didn't really care, she had no shame. The writer describes the cottage maiden as "a dove", a pure virgin, but then she changes into an "unclean thing". She makes the Lord sound dirty and disgusting for having s*x with her. Later on in the poem, the main character in "Cousin Kate" feels betrayed and hurt, just like the girl in "The Seduction". The cottage maiden feels anger towards her cousin, "Your love was writ in sand..." This creates imagery about a tide washing away something written in sand, I can see it disappearing just like Kate's love. The cottage maiden is very self pitying, I can tell this because she uses words like, "moan" and "howl". ...read more.

The writer creates such tone by using the "k" sound throughout the sentence. However, "Cousin Kate" starts off on a happy sentence, "Contented with my cottage mates..." Cousin Kate also finishes on a happy note because she talks about how she has a son and Kate doesn't she rubs it in Kate's face for all the things she had put her cousin through. "The Seduction" on the other hand ends with, "Better to starve yourself, like a sick precocious child..." She would rather starve than have a baby. In my opinion, I prefer the poem, "Cousin Kate" because she stands up for herself and acts proud. She doesn't hide away like the girl in "The Seduction". The cottage maiden curses her cousin and the Lord for putting her through h**l but in the girl in "The Seduction" just hides away in her room, ripping up magazines. I also find the girl in "The Seduction" very unbelievably innocent; she is easily led and lured and doesn't stick up for herself. She keeps referring back to the past and going over it, regretting it even though she cannot change it. I like poems when they are in first person because I feel like I can relate to it better and understand emotions well. "Cousin Kate" is in first person so I can really relate to the character; I knew exactly what was going through her mind. "The Seduction" was too much focused on the media and alcohol and smoking, which I didn't like. By Vanessa Patel ...read more.