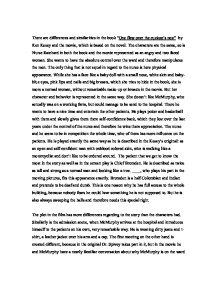 Differences and similarities in the book and film of

There are differences and similarities in the book "One flew over the cuckoo's nest" by Ken Kesey and the movie, which is based on the novel. The characters are the same, so is Nurse Ratchard in both the book and the movie represented as an angry and two faced woman. She wants to have the absolute control over the ward and therefore manipulates the men. The only thing that is not equal in regard to the nurse is here physical appearance. While she has a face like a baby doll with a small nose, white skin and baby-blue eyes, pink lips and nails and big breasts, which she tries to hide in the book, she is more a normal woman, without remarkable make-up or breasts in the movie. But her character and behavior is represented in the same way. She doesn't like McMurphy, who actually was on a working farm, but could manage to be send to the hospital. There he wants to have a nice time and entertain the other patients. He plays poker and basketball with them and slowly gives them there self-confidence back, which they lost over the last years under the control of the nurse and therefore he wins there appreciation. ...read more.

Like in the first meeting Dr. Spivey never takes part in such events in the screen play like it's described in the novel. Other examples for such changes by the regieseur are the basketball scenes. While they always take place on the ward in the original, they are always outside in the film. The fishing scene is also very different. Similar is that in the narrative likewise as in the screen play McMurphy organizes the whole trip and when they reach the harbor they steal a boat. Totally different is the journey to the harbor: In the original McMurphy passes Candy Starr and a girlfriend of hers, both prostitutes, off as his aunts, who would take care of the men. The trip is well prepared and they even have permission from the nurse for their fieldtrip even when she doesn't like to see the men leaving with McMurphy. She tried the whole time to influence the men and therefore told them that the sea is very stormy and that they could die, but this tactic fails. At the end Candy's girlfriend doesn't show up and instead of her Dr. ...read more.

Conversely in the movie, when he recognizes what happened, he gives him a hug and then kills him by pushing a pillow on his face before he escapes. All in all, the plot is very similar presented in the movie, like it's described in the book also when the regiseur left out some scenes. But this procedure is necessary, because of the time factor. Nobody cares how long a book is. The author can nearly write as much as he likes, but the film would be too long with all the scenes that are described. The point of view in the motion picture is totally different from the point of view in the book. In the story Bromden is the narrator, a first person narrator. That's the reason why he has to take part in all events Kesey wants us to know about. Otherwise there would be no way we would get this information. This point of view is good, because we see and feel with Bromden, who is a very important character. But on the other hand we never know, what the others are thinking, except Bromden would talk to them. That's why an omniscient narrator, like the camera represents it in the movie, is very useful, because it can watch into everybody and shows their feelings. ...read more.