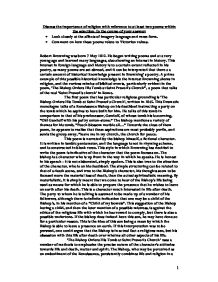 Discuss the importance of religion with reference to at least two poems within the selection. In the course of your answer Look closely at the affects of imagery language and verse form, and Comment on how these poems relate to Victorian values.

Discuss the importance of religion with reference to at least two poems within the selection. In the course of your answer; * Look closely at the affects of imagery language and verse form. * Comment on how these poems relate to Victorian values. Robert Browning was born 7 May 1812. He began writing poems and at a very young age and learned many languages, also showing an interest in history. This interest in foreign language and history is to a certain extent reflected in his poetry, as many poems are set abroad, and it can be interpreted that there s a certain amount of historical knowledge present in Browning' s poetry. A prime example of this possible historical knowledge is the interest Browning shows in religion, and the various mimics of biblical events, particularly evident in the poem, 'The Bishop Orders His Tomb at Saint Praxed's Church", a poem that talks of the real 'Saint Praxed's church' in Rome. The first poem that has particular religious grounding is 'The Bishop Orders His Tomb at Saint Praxed's Church', written in 1845. This Dramatic monologue talks of a Renaissance Bishop on his deathbed instructing a party on the tomb which he aspires to have built for him. ...read more.

In particular, he is unable to interpret the literal expression of religious matter properly. Browning's Bishop finds himself in the predicament of a man of the church who can only accept the material and yet passionately desires immortality which requires an intense belief in religion. As a result, he collapses life and religion into each other, resulting in the life of a character that is most unfitting for his current profession. This fusion and confusion encourages his passionate desire for immortality, and is well suited to the assumed psychological state of a dying man, and perhaps this suitability provides another reason why Browning chose to set this character portrait within the context of a death-bed scene. The Bishop in 'The Bishop Orders His Tomb at Saint Praxed's Church' denounces most Victorian values active at the time, and the Bishop, can be interpreted as an emblem of the renaissance. This defiant act of Browning's through his poetry is the embodiment of the resentment Browning felt for the Victorian era, in which he was living. In many of his poems that are defiant undertones. And this poem is one of the more obvious. ...read more.

In order to capture the mood of the monk, Browning has broken the poem up with sections of songs and drunken outbursts, "Flower o' the pine, you keep your mistr-manners, and I'll stick to mine!" In doing so he succeeds beautifully in portraying a person under the influence of alcohol. Brother Lippi's language is also not that of a monk, he often repeats the word 'Zooks!' which is considered a swear word, and certainly not language a dedicated monk would call out. There is a great deal of punctuation throughout this poem, particularly exclamation marks. This is indicative of the characters enthusiasm in his speech, and most probably of his drunken state. In the poems by Robert Browning, there are many parodies in which he mimics his own experiences with experiences of another, usually in previous times. This is a safe way for Browning to express his negative feeling about certain aspects of Victorian society, and record them through his own form of art, his poetry. If he had simply written about them in exact replica, he would have caused social outrage and unnecessary revolt. In completing his work in this manner he has avoided all, and provided stead fast characters for many of his poems. 1 ...read more.