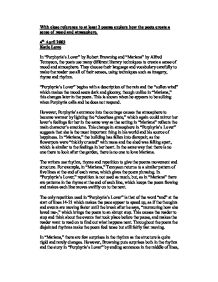 With close reference to at least 2 poems explore how the poets create a sense of mood and atmosphere.

With close reference to at least 2 poems explore how the poets create a sense of mood and atmosphere. 4^th April 2003 Katie Lowe In "Porphyria's Lover" by Robert Browning and "Mariana" by Alfred Tennyson, the poets use many different literary techniques to create a sense of mood and atmosphere. They choose their language and vocabulary carefully to make the reader use all of their senses, using techniques such as imagery, rhyme and rhythm. "Porphyria's Lover" begins with a description of the rain and the "sullen wind" which makes the mood seem dark and gloomy, though unlike in "Mariana," this changes later in the poem. This is shown when he appears to be sulking when Porphyria calls and he does not respond. However, Porphyria's entrance into the cottage causes the atmosphere to become warmer by lighting the "cheerless grate," which again could mirror her lover's feelings for her in the same way as the setting in "Mariana" reflects the main character's emotions. ...read more.

The only repetition used in "Porphyria's Lover" is that of the word "and" at the start of lines 14-21 which makes the pace appear to speed up, as if the thoughts and events are moving faster until the break after he says, "murmuring how she loved me-," which brings the poem to an abrupt stop. This causes the reader to stop and think about the events that took place before the pause, and makes the reader want to read on to find out what happens next. Throughout the poem the disjointed rhythms make the poem feel tense but still fairly fast moving. In "Mariana," there are few surprises in the rhythm as the structure is quite rigid and rarely changes. However, Browning puts surprises both in the rhythm and the story in "Porphyria's Lover" by ending sentences in the middle of lines, such as "Three times her little throat around, and strangled her." ...read more.

As Porphyria is murdered, very little punctuation is used so the reader can almost imagine Porphyria's hair being "wound three times her little throat around" gently and softly. The flowing rhythm makes the mood eerily calm, and this feeling continues right to the end of the poem. The opposite effect is created in "Mariana," as Tennyson uses punctuation such as commas and semi-colons to create breaks, which gives the poem a slow pulse and almost shows the passage of time that Mariana has to put up with. The last three to four lines of each poem have many similarities. Both refer to God, showing the religious thoughts of the time, and, more importantly, the both leave the reader wondering what happens next, and leave many questions unanswered. "Porphyria's Lover" and "Mariana" are both examples of how poets can create depressing and eerie moods and atmosphere using clever vocabulary, imagery, rhyme and rhythm. I think that the poems are both quite romantic, but are both examples of how too much love can be a bad thing. ...read more.