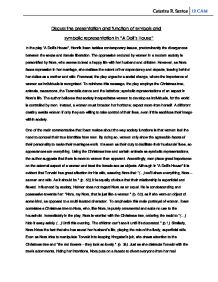 Discuss the presentation and function of symbols and symbolic representation in &quot;A Dolls House&quot;

Discuss the presentation and function of symbols and symbolic representation in "A Doll's House" In the play "A Doll's House", Henrik Ibsen tackles contemporary issues, predominantly the divergences between the sexes and female liberation. The oppression endured by women in a modern society is personified by Nora, who seems to lead a happy life with her husband and children. However, as Nora faces repression in her marriage, she realises the extent of her dependency and departs, leaving behind her duties as a mother and wife. Foremost, the play urges for a social change, where the importance of women as individuals is recognised. To reinforce this message, the play employs the Christmas tree, animals, macaroons, the Tarantella dance and the letterbox; symbolic representations of an aspect in Nora's life. The author believes that society incapacitates women to develop as individuals, for the world is controlled by men. Instead, a woman must broaden her horizons; expect more from herself. ...read more.

hide it away safely (...) Until this evening. The children can't see it until it's decorated." (p.1). Similarly, Nora hides the fact that she has saved her husband's life, playing the role of the lively, superficial wife. Even as Nora tries to manipulate Torvald into keeping Krogstad's job, she draws attention to the Christmas tree and "the red flowers - they look so lovely." (p. 39). Just as she distracts Torvald with the tree's adornments, hiding her intentions, Nora puts on a facade to divert everyone from her real personality. Being the master of appearances, it is only when Nora's life is disintegrating that "(...) the Christmas tree stands, stripped of presents, dishevelled and with the remains of burned down candles." (p. 42), symbolising her devastation as she faces the shallowness of her marriage and Torvald's controlling nature. Portraying the typical man, Torvald does not view Nora as an equal. ...read more.

Recurrent throughout the play, they signal how Nora changes from the submissive wife to an independent woman. If initially Nora hides the macaroons and lies about them, as the drama develops, Nora gains more confidence in eating and showing her love for the sweets. As she realises the powerful position that Torvald has just been offered at the bank, feeling good-humoured, "(she takes a bag out of her pocket) (...)" and offers "A little macaroon, Dr. Rank?" (p. 23). Even though she then lies about the macaroons, insisting that "(...) Kristine gave me these." (p. 24), already Nora is unafraid to reveal her disobedience towards Torvald and expresses her own tastes. Although presented as a sign of suppression, the macaroons show Nora's disobedience, which already indicates a certain solidity and sureness of character. Even if Torvald takes control To avoid confrontation with Torvald, or more importantly with the truth about her marriage, Nora constantly deceives her husband. ?? ?? ?? ?? Catarina R. Santos 12 CAM ...read more.