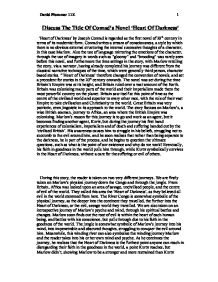 Discuss The Title Of Conrad's Novel 'Heart Of Darkness'.

Discuss The Title Of Conrad's Novel 'Heart Of Darkness' 'Heart of Darkness' by Joseph Conrad is regarded as the first novel of 20th century in terms of its modernist form. Conrad writes a stream of consciousness, a style by which there is no obvious external structuring the internal successive thoughts of a character, in this case Marlow. Also the use of language mirroring the emotions of the character, through the use of imagery in words such as "gloomy" and "brooding" was rarely seen before this novel, and furthermore the time settings in the story, with Marlow retelling the story, via a narrator, having already completed his journey was different from the classical narrative techniques of the time, which were generally third person, character based stories. "'Heart of Darkness' therefore changed the convention of novels, and set a precedent for stories in the 20th century onwards. The novel was set during the time Britain's Empire was at its height, and Britain ruled over a vast amount of the Earth. Britain was colonising many parts of the world and their imperialism made them the most powerful country on the planet. Britain saw itself at this point of time as the centre of the civilised world and superior to every other race, with the role of their vast Empire to take civilisation and Christianity to the world. Great Britain was very patriotic, even jingoistic in its approach to the world. The story focuses on Marlow's, a wise British seaman, journey to Africa, an area where the British Empire was colonising. Marlow's reason for this journey is to go and work as an agent, but it becomes finding another agent, Kurtz, but during the journey his first hand experiences of colonialism, imperialism and of death and suffering handed out by the 'civilised British'. His awareness causes him to struggle in his beliefs, struggling not to succumb to the evil around him, and he soon realises that rather than being separate to the darkness, he is part of ...read more.

He also sees a "lot of imported drain pipes", symbolic of civilisation, which was a "wanton smash up" showing how what the British were doing was almost anarchy, as a symbol of civilisation was completely destroyed, a complete contradiction to what they thought the were doing in bringing civilisation, arising the question of what is civilisation? He continues, passing "black shapes" and "dim light", symbolic of evil. Another explosion takes place and Marlow states "The work was going on. The work! And this was the place where some helpers had withdrawn to die" "The Work!" is evidently a hyperbole of the suffering taking place and this statement is conveyed in a sarcastic, exasperated tone, showing Marlow doesn't understand the meaning of all this, and is beginning to recognise this is not so much a civilising mission as he first thought. Conrad begins to describe people as inhuman, almost robots. Marlow describe "black shadow of disease and starvation" a shadow almost symbolic of half human and the fact their black, evil and despair. He describes the "sickened" as "inefficient", almost calling them robots, void of emotions and feelings, showing these people had reached the ultimate point of evil, the heart of darkness. The fact these people were allowed to "crawl away and rest", or die shows them completely lost of feeling, and the fact the only way they can leave this place is by dying shows their evil. The freedom of death makes you feel that you are trapped in life, and only free when you die, which is the only certain this to happen in life, so the ultimate question 'What is the meaning of life?' is raised. He also calls a pile of dead bodies " two more bundles of acute angles" showing these men to be worthless and emotionless, and "creatures" showing we are all savages, wild and untamed, emphasizing the ultimate question. ...read more.

The fact Marlow, and also Kurtz, struggle so much with their consciences and morality is because of their awareness. They both realised the evil around them and tried to fight against it, but eventually they both realised that they too could be evil, and Kurtz's fatal flaw, lack of restraint, allowed him to be tempted into being evil and reaching the Heart of Darkness. Marlow, on the other hand, managed to resist the urge, showing him to be stronger than Kurtz. It was Marlow's faith in the goodness in the world that allowed him to pull through, and avoid reaching the Heart of Darkness, and he is left at the end of the novel wanting others to share this belief of his, and prevent the evil deep down from coming out. There was a Victorian work ethic 'the devil makes work for idle hands' which was used to get people into work. Marlow believed it was only through work, through continual aims and goals that we discover who we really are. He claims through working, and understanding your work, do we really find out our own reality. Marlow is finally left looking into himself. He originally claimed that the 'culmination of my experience is finding Kurtz' which turned out to be a great disappointment and anticlimax. The real culmination of his experience was the realisation that he is in fact part of this whole process rather than having nothing to do with it, as he originally believed. He also realises that darkness originates from deep down in the heart of every human being, and is not so much the evil actions or an area of land as he had originally suspected. Kurtz also realised this, at his death, and through their shared struggle and joint realisation, Marlow is left feeling respect for Kurtz. Marlow is left wanting to spread this belief in goodness, a belief people even these days would be wise to listen to, amidst this world of war, a world that over 100 years appears to have learned no lessons. 1 David Plummer 11Z ...read more.