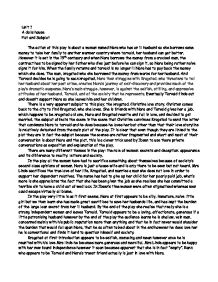 Unit 1 A dolls house Plot and Subplot The action of this play is about a woman named Nora who has an ill husband so she borrows some money to take her family to another warmer country where torvald, her husband can get better. However it is set in the 19th centaury and when Nora borrows the money from a crocked man, the contract has to be signed by her father who dies just before he can sign it, so Nora being rather naive signs it for him. When the family returns and torvald is no longer ill Nora has to pay back the money which she does. The man, krogstad who she borrowed the money from works for her husband. And Torvald decides he is going to sack krogstad, Nora then struggles with Krogstad, who threatens to tell her husband about her past crime, creates Nora's journey of self-discovery and provides much of the play's dramatic suspense. Nora's main struggle, however, is against the selfish, stifling, and oppressive attitudes of her husband, Torvald, and of the society that he represents. Eventually Torvald finds out and doesn't support Nora so she leaves him and her children. There is a very apparent subplot to this play; the krogstad. Christine love story. Christen comes back to the city to find Krogstad, who she loves. ...read more.

with his public reputation more than anything and that he in fact never would shoulder the burden that would fall upon Nora, that he so often talked about in the end however he does love her he is conventional and finds it hard to question himself and society. Krogstad at first introduction appears to be selfish, menacing and mean however once he is reunited with his love Mrs linde he becomes more generous and merciful. Mrs Linde appears to be happy with her new found independence however it soon becomes apparent that she is in fact "empty". Rank who appears to be Torvald and Nora's truest friend actually is just in love with Nora. Deception is a definite theme; the main liar in this play is Nora as she deceives Torvald about big things such as the loan. At first it seems that Torvald also lies to Nora saying that "I have often wished that you might be threatened by some great danger, so that I might risk my life's blood, and everything, for your sake." However in reality when she does get in trouble all he cares about is his public reputation and definitely not her however at the time he does think that he would , therefore he is not lying. Mrs Linde is a force for truth in Nora's life and that is why she is in the play she also makes the end happen as she ...read more.

The particular point in this act we chose was when Torvald was showing Nora of to Mrs Linde. We asked Torvald to spin Nora round as if still dancing with her to show she is just a doll and that he can do what ever he likes with her. We also had Nora's face looking emotionless almost robotic like showing how when her husband wants her to do something she lets him almost control her body , but not her mind, he cant make her look happy. We also asked Torvald to say thins like "isn't she unbelievably beautiful "Oblivious to her facial expression, showing her dissatisfaction. For our final still image we chose the final scene were Nora has had enough and has decided to leave Torvald as when he found out she was in trouble he had not saved her. For this still image we had Nora at the front of the stage, centre stage to symbolises how powerful she had not become, we placed Torvald behind her on his Knees whimpering .Looking back on this still image I find it interesting how ironic this is as now Nora is the strong adult and Torvald has be reduced to a whimpering child. Our three still images, we felt, showed the transition of power between the two characters of Nora and Torvald very well. ...read more.