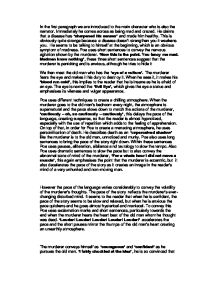 In the first paragraph we are introduced to the main character who is also the narrator. Immediately he comes across as being mad and crazed. He claims that a disease has 'sharpened his senses' and made him healthy. This is obviously quite strange because a disease doesn't strengthen you it weakens you. He seems to be talking to himself at the beginning, which is an obvious symptom of madness. Poe uses short sentences to convey the nervous agitation shown by the murderer. 'Now this is the point. You fancy me mad. Madmen know nothing', these three short sentences suggest that the murderer is panicking and is anxious, although he tries to hide it We then meet the old man who has the 'eye of a vulture'. The murderer fears the eye and makes it his duty to destroy it. When he sees it, it makes his 'blood run cold', this implies to the reader that he is insane as he is afraid of an eye. The eye is named the 'Evil Eye', which gives the eye a status and emphasises its vileness and vulgar appearance. Poe uses different techniques to create a chilling atmosphere. ...read more.

the murder he is satisfied that the deed has been done and as he hides the body, he describes his actions as a 'perfect suavity', he thinks of himself as dexterous and omniscient. However, when the police arrive and begin to interrogate him, his boldness gradually withdraws from him. At first he remains confident when they arrive and describes his murder as a 'perfect triumph', but as he begins to hear a ringing noise he shows his guilt and becomes distressed and agitated. Poe uses long sentences, exclamation marks and the repetition of a rhetorical question to show this. The murderer begins to lose self-control, he becomes angry and psychotic using, 'violent gesticulations' to express his anger. Then he loses control completely and 'admits the deed' bringing the story to an abrupt conclusion, leaving the reader to imagine what the police might do with him. In 'The Fall of the House of Usher', the reader is instantly met by a bleak, sepulchral and dismal atmosphere. Poe uses immensely depressing sentences to show this. The narrator who is a friend of the diseased Roderick Usher states, 'insufferable gloom pervaded my spirit' when he sights the house, this suggests to the reader that this house has a paranormal atmosphere to it to be able to cause such an effect on anyone who looked at it. ...read more.

To the modern reader this comes as little surprise, almost foreseeable and maybe too clich�d. Both 'The Tell-Tale Heart' and 'The Fall of the House of Usher' have quite simple storylines. Poe creates tension and suspense in both stories formulating a sinister and ominous atmosphere, which may appeal to the modern reader as it fits in more closely with the orthodox modern day horror genre. However, Poe doesn't use unambiguous descriptions and images to create that fear, instead he relies on the reader's imagination to create these meticulous images in their heads. Poe uses more antiquated and sophisticated sentences such as 'I fancied a ringing in my ears', the modern day reader may not be used to this type of language. Poe's sentence structure can also prove a challenge to understand, which means the reader has to spend more time and effort to be aware of what is going on, the modern day reader may not be up to the challenge and not be willing to make the effort. Nowadays we are used to straightforward language, which is easier to comprehend. Overall I believe that Poe was a successful gothic writer as he has used clever description to create the atmosphere he wants and to form a picture of the abnormal characters he uses in the two short stories. ...read more.