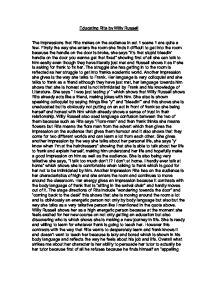 Educating Rita by Willy Russell The impressions that Rita makes on the audience in act 1 scene 1 are quite a few. Firstly the way she enters the room she finds it difficult to get into the room because the handle on the door is broke, she says "it's that stupid bleedin' handle on the door you wanna get that fixed" showing first of all she can talk to him easily even though they have literally just met and Russell shows it as if she is asking for frank to fix her. The struggle she has getting in to the room is reflected as her struggle to get into franks academic world. Another impression she gives is the way she talks to Frank. Her language is very colloquial and she talks to frank as a friend although they have just met, her language towards him shows that she is honest and is not intimidated by Frank and his knowledge of Literature. She says " I was just testing y' " which shows that Willy Russell shows Rita already acts like a friend, making jokes with him. She also is shown speaking colloquial by saying things like "y'" and "bleedin'" and this shows she is uneducated but is obviously not putting on an act in front of frank so she being herself and honest with him which already shows a sense of trust in their relationship. Willy Russell also used language confusion between the two of them because such as Rita says "Flora-man" and then frank thinks she means flowers but Rita means the flora man from the advert which then gives the impression on the audience that gives them humour and it also shows that they come for two different worlds and can learn a lot from each other. She gives another impression by the way she talks about her personal life, she says "y' know when I'm at the hairdressers" showing that she is able to talk about her life to frank ...read more.

In the first Act scene 1 she talks to frank about her personal life in a normal casual way but between the scenes her personal life changes dramatically from Act 1 Scene 1 to Act 2 Scene 1. First of all in Act 1 Scene 1 she smokes and clearly doesn't care that is smoking, she says, " Everyone seems to have packed in these days, They're all afraid of getting cancer" which shows she doesn't care about packing up smoking yet. In contrast, in Act 2 scene 1 her opinion changes towards smoking because now that she is educated she has given up. She says, "No-ta I've packed it in" showing she is moving on from her old self who used to smoke. Overall she has made a lot of changes throughout the first act to the second act and she as obliviously changed her life for the better. Willy Russell decided that the character of Rita should change in these ways because he wants us to know, first of all, the way Rita's character was at the start from being Rita choosing a name from the author of a book, " Rita Mae Brown" then she changed more of her life through each scene and then in act 2 scene 1 she has totally transformed into a new educational woman which shows that people like Rita who want to change their lifestyle can achieve it if they are determined to make the changes themselves. Rita desperately wanted to change and become something and Willy Russell shows through Rita that education can be achieved. The important ideas that are explored in her character that changes are first of all her education, which is the most obvious change. She started off as a uneducated woman who spoke in colloquial language towards Frank then through the scenes she turns into an educated and formally spoken woman showing things can be achieved when you want them. ...read more.

Frank's personal life changes just like Rita's does and he is very comfortable talking to Rita about it and this helps with their good friendship that has been made. Russell also decided for him to change because Frank can finally be happy from actually succeeding with his job instead of feeling worthless and stupid about it. He helped someone who he cared about and was a new fresh mind to him. He is obviously happy with the changes that Rita has made throughout and will be even happier knowing that helping her also helped him get over his drink problem. Knowing he has helped someone to get a proper education he can become a better teacher and can enjoy his job instead of loathing it. At the end of Act 2 scene 1 Frank and Rita still need each others help to complete their different journeys. Rita now knows Blake's poem on innocence and experience which was her own experience of learning, Blake's poems of Innocence and Experience were the two contrary states of the human soul and Blake himself believed that children should become experienced through their own discoveries with compares to how Rita has learnt through experience how to discover herself. However she still needs Frank to help her take one more step forward to passing her exam and getting her education. Frank still needs Rita because although he has drunk less that at the start he still needs the motivation from Rita to stop the drinking altogether. This is very different to the Act 1 scene 1 because they were both beginning the journeys and now they are almost finishing it, so Rita begins her journey to education and Frank begins journey to give up his drinking problem and move on. This scene then prepares the audience from the ending on a positive perspective of them, Frank will move on from alcohol and perhaps a new job and Rita will take her literature exam, then they will both spilt up in a friendly way knowing they have helped one another change into something better than before. ...read more.