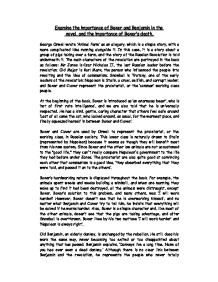 Examine the importance of Boxer and Benjaminin the

Examine the importance of Boxer and Benjamin in the novel, and the importance of Boxer's death. George Orwell wrote 'Animal Farm' as an allegory, which is a simple story, with a more complicated idea running alongside it. In this case, it is a story about a group of pigs taking over a farm, and the story of the Russian Revolution is told underneath it. The main characters of the revolution are portrayed in the book as follows: Mr Jones is Czar Nicholas II, the last Russian leader before the revolution; Old Major is Karl Marx, the person who influenced the people into revolting and the idea of communism; Snowball is Trotsky, one of the early leaders of the revolution; Napoleon is Stalin, a cruel, selfish, and corrupt leader; and Boxer and Clover represent the proletariat, or the 'common' working class people. At the beginning of the book, Boxer is introduced as 'an enormous beast', who is 'not of first rate intelligence', and we are also told that he is universally respected. ...read more.

However, Boxer doesn't see that he is overworking himself, and no matter what Benjamin and Clover try to tell him, he insists that everything will be solved if he works harder. Also, Boxer is a simple character and, like most of the other animals, doesn't see that the pigs are taking advantage, and after Snowball is overthrown, Boxer lives by his two mottoes 'I will work harder' and 'Napoleon is always right'. Old Benjamin, an elderly donkey, is unchanged by the rebellion. He still does his work the same way, never becoming too exited or too disappointed about anything that has passed. Benjamin explains, 'Donkeys live a long time. None of you has ever seen a dead donkey.' Although there is no clear link between Benjamin and the revolution, he represents the people who never totally embrace the revolution - those so cynical they no longer look to their leaders for help. Benjamin symbolises the older generation, the critics of any new rebellion. Really, this old donkey is the only animal that seems as though he couldn't care less about Napoleon and Animal Farm. ...read more.

After Boxer dies, the pigs evilly use the money they get for his body on alcohol for themselves, without any consideration for the rest of the farm. The end of the book shows how the leaders of the Russian Revolution turned out to be just as bad, if not worse than the czars, 'The creatures outside looked from pig to man, and from man to pig, and from pig to man again: but already it was impossible to say which was which.' George Orwell put Boxer in the story and killed him to show that all his hard work, like the proletariats in the Russian Revolution, was for nothing and that, in the end, it would always go back to the way it was at the beginning. This is something that Benjamin knew all the way through, and after the animals have forgotten Jones and their past lives, 'Only old Benjamin professed to remember every detail of his long life and to know that things never had been, nor ever could be much better or much worse; hunger, hardship, and disappointment being, so he said, the unalterable law of life.' ...read more.