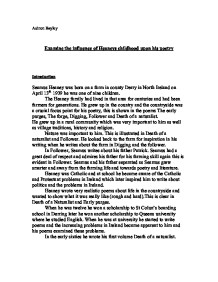 Examine the influence of Heaneys childhood upon his poetry

Ashton Bayley Examine the influence of Heaneys childhood upon his poetry Introduction Seamus Heaney was born on a farm in county Derry in North Ireland on April 13th 1939 he was one of nine children. The Heaney family had lived in that area for centuries and had been farmers for generations. He grew up in the country and the countryside was a crucial focus point for his poetry, this is shown in the poems The early purges, The forge, Digging, Follower and Death of a naturalist. He grew up in a rural community which was very important to him as well as village traditions, history and religion. Nature was important to him. This is illustrated in Death of a naturalist and Follower. He looked back to the farm for inspiration in his writing when he writes about the farm in Digging and the follower. In Follower, Seamus writes about his father Patrick. Seamus had a great deal of respect and admires his father for his farming skill again this is evident in Follower. Seamus and his father separated as Seamus grew smarter and away from the farming life and towards poetry and literature. Heaney was Catholic and at school he became aware of the Catholic and Protestant problems in Ireland which later inspired him to write about politics and the problems in Ireland. ...read more.

The atmosphere is a lot more threatening as well 'the air was thick with a bass chorus'. The last sentence is the most important it said, 'The slime kings were gathered there for vengeance and I knew that if I dipped my hand the spawn would clutch it'. I think at this point he sees that he had taken the frogs children and it would be like if the frogs stole him away from his mother and father. My next poem is called Follower. This poem illustrates the close relationship between Heaney and his father and him reflecting on his childhood. When his father is working he said, 'his shoulders globed like a full sail strung' this shows strength, power and it conjures an image of the Greek mythology God Atlas. Heaney remarks on the skill of his father frequently, 'the sod rolled over without breaking' and 'An expert'. He does this because he wants to emphasize his point that his father was a skilled farmer. His father and his horse were like a team the classic situation of man and beast working together, 'with a single pluck of reins, the sweating team turned round and back into the land'. ...read more.

Heaney uses a lot of negative sound in the poem, 'soft paws scraping like mad but there tiny din was soon soused'. Dan's reaction to this was, 'sure its better for them now' I think he said this to comfort Heaney but didn't really believe it. This incident scared him at first but as he saw more and more things killed so he hardened to it, 'And now when shrill pups are drowned I just shrug , bloody pups. It makes sense'. Heaney thinks it makes sense because he now knows that in a well run farm pests must be kept down. 'prevention of cruelty cuts ice in town' He said this because town people don't know what is needed to run a farm and think it is cruel and wrong to kill healthy animals. Conclusion I think Heaney's childhood had a huge influence on his poetry because he writes a lot about life on the farm with his father. The poems that I have analyzed have all been written from his point of view when he was a child. I think that he wrote from a child's point of view because when you are a child the world is still a mystery and even minor experiences can have a profound impact on your young life. ...read more.