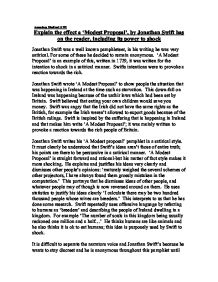 Explain the effect a 'Modest Proposal', by Jonathan Swift has on the reader, including its power to shock.

Amandeep Dhaliwal 11W2 Explain the effect a 'Modest Proposal', by Jonathan Swift has on the reader, including its power to shock Jonathan Swift was a well known pamphleteer, in his writing he was very satirical. For some of these he decided to remain anonymous. 'A Modest Proposal' is an example of this, written in 1729, it was written for the intention to shock in a satirical manner. Swifts intentions were to provoke a reaction towards the rich. Jonathan Swift wrote 'A Modest Proposal' to show people the situation that was happening in Ireland at the time such as starvation. This down-fall on Ireland was happening because of the unfair laws which had been set by Britain. Swift believed that eating your own children would save you money. Swift was angry that the Irish did not have the same rights as the British, for example the Irish weren't allowed to export goods because of the British rulings. Swift is inspired by the suffering that is happening in Ireland and that makes him write 'A Modest Proposal'; it was mainly written to provoke a reaction towards the rich people of Britain. ...read more.

This is aimed directly to England and he explains his hatred towards some English, especially landlords. We find out about Swift's satirical character when he says 'But to myself, having been wearied out for many years with offering vain, idle, visionary thoughts, and at lengthy utterly despairing of success I fortunately fell upon this proposal.' The narrator incur here that he spent years of his life on other silly ideas and then he came up with the idea of cannibalism; which he expressed by giving aids such as statistics and calculating facts. The narrator is a fictional character, paragraph 31 shows the satires of his writing. The narrators job is to persuade the Irish to think about there actions, like there relationship with their neighbour country. He dislikes some British for his own personal reasons and this pamphlet wants gives emphasis on this. Swift uses many persuasive devices such as emotive words, tripling, shock tactics and also farming imagery. Swifts use of tripling is written through this pamphlet, and example of this is 'fair, cheap and easy' Listing in threes is proven to be more effective than listing in twos or fours. ...read more.

This would shock readers as he explains himself in paragraph thirty one, now in thirty two he has strong feasible reasons for no one else to come up with suggestions. To conclude Swifts satire suggestions are still able to shock in the twenty first century and his satire is still effective even after paragraph thirty one. He shocks the readers throughout and his persuasion is realistically believable. His parody and satirical manner still definitely has the power to shock in this day and age. To summaries Jonathan Swift's 'A Modest Proposal is a pamphlet written for the people of Ireland for preventing the children of the poor people in Ireland from being a burden to their parents or country, and for making them beneficial to the public. The most shocking thing about 'A Modest Proposal' is that all of his proposal-his whole piece of writing is based on fiction not fact and the narrator is an imaginary character created by Swift. Swifts whole idea is backed up by his research from statistics and to conclude his proposal is one simple idea for making the Irish children useful so that their parents and the government don't have to look after them. ...read more.