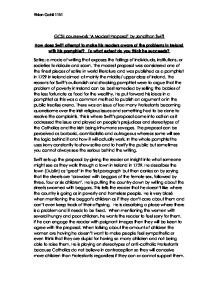 A Modest Proposal by Jonathan Swift How does Swift attempt to make his readers aware of the problems in Ireland with his pamphlet? To what extent do you think he succeeds?

GCSE coursework 'A Modest Proposal' by Jonathan Swift How does Swift attempt to make his readers aware of the problems in Ireland with his pamphlet? To what extent do you think he succeeds? Satire; a mode of writing that exposes the failings of individuals, institutions, or societies to ridicule and scorn. The modest proposal was considered one of the finest pieces of satire in world literature and was published as a pamphlet in 1729 in Ireland aimed at mainly the middle/ upper class of Ireland. The reasons for Swift's outlandish and shocking pamphlet were to argue that the problem of poverty in Ireland can be best remedied by selling the babies of the less fortunate as food for the wealthy. He put forward his ideas in a pamphlet as this was a common method to publish an argument or in the public treatise arena. There was an issue of too many Protestants becoming quarrelsome over the Irish religious issues and something had to be done to resolve the complaints. This is where Swift's proposal came into action as it addressed the issue and played on people's prejudices and stereotypes of the Catholics and the Irish being inhumane savages. The proposal can be perceived as barbaric, cannibalistic and outrageous whereas some will see the logic behind it and how it will actually work. ...read more.

This is because they will have to be fed alot more than a one year old baby as they are growing and need to have some fat and meat on them to be used as food. They would be expensive to breed, clothe and feed. He never gives the full proposal in the first paragraphs which builds suspense as you want to know more and ask questions about why he is doing what he is and when will this happen. Swift reveals his proposal in paragraph 9 and 10 by mentioning 'a very knowing American of my acquaintance in London' which implies that he is blaming the theory on someone before he even starts. He says that this man told him that a 'young healthy child well nursed, is, at a year old, a most delicious nourishing and wholesome food'. This line would have most probably shocked all readers because they would never think of eating babies however Swift would see it as comical because it is a ridiculous idea in the first place. He then adds to the horrific idea of eating children by listing some of the ways to cook them! This is where Swift is being satirical and humorous because he would never cook a child 'in a fricasie, or a ragout'. ...read more.

He says that the poor people will be completely safe from harsh weather because they can stay in the house by paying the rich English landlords with their raised baby. Overall, the proposal created awareness of the horrific conditions in Ireland that the Catholics were living in and what they would have to give up just so they could feed their families. He uses a lot of exaggeration as the purpose of the piece was to entertain the readers. However as it was a piece of satire people wouldn't always see the veiled meanings behind so they would be horrified at the level of inhumanity in the writing. He was criticising both the Catholics and the Protestants even though he is protestant which means that he wasn't just writing a biased anti-English piece. He wanted to criticise both sides by writing an agenda to help Ireland. I think that it is a very successful piece of satire as it is a world famous piece of writing that gave out messages to the public about the way people were being treated and to see the reactions that people would give by reading it. The key point is that it would be better to die at one years old that having to live a life of suffering in Ireland. ?? ?? ?? ?? Rhian Gohil 11B1 ...read more.