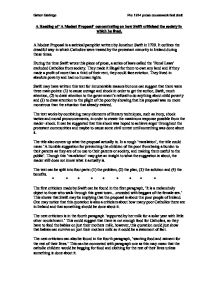 Reading of 'A Modest Proposal' concentrating on how Swift criticised the society in which he lived. A Modest Proposal is a satirical pamphlet written by Jonathon Swift in 1729

A Reading of 'A Modest Proposal' concentrating on how Swift criticised the society in which he lived. A Modest Proposal is a satirical pamphlet written by Jonathon Swift in 1729. It outlines the dreadful way in which Catholics were treated by the protestant minority in Ireland during these times. During the time Swift wrote this piece of prose, a series of laws called the 'Penal Laws' excluded Catholics from society. They made it illegal for them to own any land and if they made a profit of more than a third of their rent, they could face eviction. They lived in absolute poverty and had no human rights. Swift may have written this text for innumerable reasons but one can suggest that there were three main points: (1) to cause outrage and shock in order to get the author, Swift, much attention, (2) to draw attention to the government's refusal to do anything about child poverty and (3) ...read more.

The next criticism is in the fourth paragraph 'supported by her milk for a solar year with little other nourishment.' This could suggest that there is not enough food for Catholics, so they have to feed the babies on just their mothers milk, however, this quotation could just show that babies can survive on just their mothers milk so it could be a statement of fact. The next criticism can also be found in the fourth paragraph, 'wanting food and raiment for the rest of their lives.' This can be connected with paragraph one as this may mean that the catholic children would be begging for food and clothing for the rest of their lives unless something is done about it. Another criticism can be found in paragraph six, 'able to maintain their own children, although I apprehend that there cannot be so many'. This may appear to some readers that the author is writing about the poor state of Catholics and that they are so poor, that cannot ...read more.

Swift also uses a large amount of shock tactics, par se, paragraph fifteen, 'will make admirable gloves for ladies' Though it may seem true, Swift does not actually mean to eat the children of Catholics. By suggesting such a hideous and shocking proposal, he would have gained much attention and reveal the way in which Protestants were treating the Catholic majority. Overall, it can be said that this pamphlet was very successful in trying to eliminate racism toward the Catholics but this prejudice can still be seen today between Protestants and Catholics in Ireland and parts of Scotland. It is also a great example to show how satire has changed very little throughout the centuries, for example, 'The Office' is set out very much in the same way as A Modest Proposal. The same techniques can be applied (Irony ect) and some of the same subjects can still apply such as government and other races of people but most of all, this pamphlet shows the reader just how effective using satire is to get the author's point across successfully. Simon Garlinge Pre 1914 prose coursework first draft ...read more.