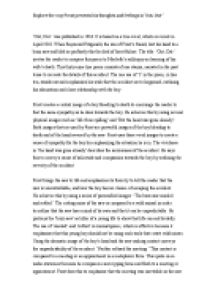 Explore the way Frost presents his thoughts and feelings in Out, Out-

﻿Explore the way Frost presents his thoughts and feelings in ?Out, Out-? ?Out, Out-? was published in 1916. It is based on a true event, which occurred in April 1910. When Raymond Fitzgerald, the son of Frost?s friend, lost his hand to a buzz saw and bled so profusely that he died of heart failure. The title: ?Out, Out-? invites the reader to compare this poem to Macbeth?s soliloquy on learning of his wife?s death. This thirty-nine-line poem consists of one stanza, narrated in the past tense to recreate the details of this accident. The one use of ?I? in the poem, in line ten, stands out and emphasizes his wish that the accident never happened, outlining his admiration and close relationship with the boy. Frost creates a central image of a boy bleeding to death to encourage the reader to feel the same sympathy as he does towards the boy. He achieves this by using several physical images such as ?life from spilling? and ?But the hand was gone already?. ...read more.

Frost does this to emphasize that the meeting was inevitable as the saw is uncontrollable by ?leaping out of the boy?s hand.? Frost feels sympathy towards the boy because he emphasizes the innocence and youth of the boy. He achieves this by introducing a first person response to the situation: ?Call it a day, I wish they would have said/to please the boy by giving him the half hour/ that a boy counts so much when saved from work.? His tone depicts the strong emotion of regret and sympathy, because if they had ended work a half hour earlier then the boy may not have died. Frost also emphasizes the innocence and youth of the boy by calling him a ?boy?, a ?big boy? and a ?child.? The innocence is implied by showing that the youngster is doing ?a man?s work? in a dangerous environment instead of playing. Frost explores the idea of the brevity of human life. ...read more.

Frost outlines the lack of care from the boy?s family: ?big boy doing a man?s work, though a child at heart.? This image suggests the poet understands that it was unnatural to overwork the boy. Frost thinks the family over-used their son and deprived or robbed him of his childhood by also not ?giving him the half hour? of freedom he wanted. In ?Out,Out-? Frost alludes William Shakespeare?s tragedy Macbeth, where Macbeth is shocked to hear of his wife?s death and comments on the brevity of life and refers to how meaningless life is. Frost concentrates on the apparent youth of the boy with phrases such as ?though a child at heart.? He may have done this to emphasize how warfare can force innocent, young boys to leave their childhood, and ultimately be killed too young. The last line in this poem: ?Since they/ Were not the one dead, turned to their affairs? is detached and blunt, mirroring a nations ability to waste youth and to detach itself and continue killing despite the dead bodies Frost publishes this poem in 1915 to convey his disapproval of the disposable attitude towards life. ...read more.