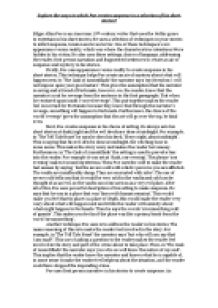 Explore the ways in which Poe creates suspense in a selection of his short stories.

﻿Explore the ways in which Poe creates suspense in a selection of his short stories? Edgar Allan Poe is an American 19th-century writer that uses the Gothic genre to entertain in his short stories. He uses a selection of techniques in your stories to inflict suspense, tension and even terror. One of these techniques were appearance versus reality, which was where the characters true intentions Were hidden to his victim. He also uses these settings, choice of language, addressing the reader, first person narration and fragmented sentences to create an air of suspense and mystery in his stories. Firstly, Poe uses appearance versus reality to create suspense in his short stories. This technique helps Poe create an air of mystery about what will happen next. In ?The Cask of Amontillado? the narrator says ?my friend no; I will not impose upon your good nature?. This gives the assumption that the narrator is caring and a friend of Fortunato, however, we, the reader, know that the narrator is out for revenge from the sentence in the first paragraph: ?But when he ventured upon insult I vowed revenge?. ...read more.

Then he says the words ?circumscribing wall of granite?. This makes you feel as if the place was like a prison/tomb from the word ?circumscribing?. Another technique Poe uses is to address the reader in his stories. The main reasoning of this is to make the reader feel involved in the story. For example, in ?The Tell Tale Heart? the narrator says ?but why will you say that I am mad??. This use of asking a question to the reader makes the reader feel involved in the story and part of the crime about to take place. Then, in ?The Cask of Amontillado? the narrator says ?you who so well know the nature of my soul?. This implies that the reader know the narrator and knows what he is capable of, in some sense it make the reader feel helpless about the situation, as if the reader could have stopped the impending crime. Poe uses first person narrative in his stories to create suspense. An example of this from ?The Cask of Amontillado? is saying ?THE thousand injuries of Fortunato I had borne as best I could?. ...read more.

It implies that the narrator will go through with his plan and something bad will happen. This will make the reader apprehensive. Finally, Poe uses gothic language to inflict suspense, tension and terror in his stories. In ?The Tell Tale Heart? the narrator uses words and phrases such as ?haunted?, ?mad?, ?blood ran cold?, ?Evil?, and in ?The Cask of Amontillado? he used ?immolation? and ?supreme madness?. These words were used to make the reader feel uneasy. For example the world ?immolation? means death by sacrifice. This will make the reader feel terror and it will make the reader feel very concerned for Fortunato. Then, the words ?mad? and ?madness? come up a lot in Poe?s stories. He uses them because it helps hint that the narrator is mad himself and the amount it is said in his stories makes the reader feel tense. Poe uses all these techniques in his short stories to infuse suspense, tension and fear. He made his stories using appearance versus reality, his choice of setting, how he addresses the reader, his first person narrative, how he fragments his sentences and the language he uses. These method, together, create the perfect gothic stories. ...read more.