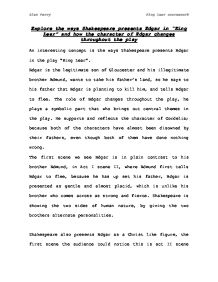 Explore the ways Shakespeare presents Edgar as a Christ like figure in the play &quot;King Lear&quot;

Explore the ways Shakespeare presents Edgar in "King Lear" and how the character of Edgar changes throughout the play An interesting concept is the ways Shakespeare presents Edgar in the play "King Lear". Edgar is the legitimate son of Gloucester and his illegitimate brother Edmund, wants to take his father's land, so he says to his father that Edgar is planning to kill him, and tells Edgar to flee. The role of Edgar changes throughout the play, he plays a symbolic part that who brings out central themes in the play. He supports and reflects the character of Cordelia; because both of the characters have almost been disowned by their fathers, even though both of them have done nothing wrong. The first scene we see Edgar is in plain contrast to his brother Edmund, in Act I scene II, where Edmund first tells Edgar to flee, because he has up set his father, Edgar is presented as gentle and almost placid, which is unlike his brother who comes across as strong and fierce. Shakespeare is showing the two sides of human nature, by giving the two brothers alternate personalities. Shakespeare also presents Edgar as a Christ like figure, the first scene the audience could notice this is act II scene III, where, Edgar decides he must ...read more.

Lear addresses Edgar as "Unaccomodated man" and a "poor, bare, forked animal" The sight of Edgar dressed as a beggar has bought Lear to the edge of madness himself. Although Lear learns an important lesson, in that his kingdom is not perfect, at this frightening sight. He becomes less self obsessed and, he seems to think that Edgar's madness comes from the unkindness of daughters; the audience can see this from the quotation "Hast thou given all to thy two daughters? And art thou come to this?" Edgar makes several references to the Ten Commandments in one speech, "Obey thy parents... swear not; commit not" which again continues the associations with Christianity. I think this scene must be almost painful to watch as it contains a conversation between a madman and a man pretending to be mad. Shakespeare provides Lear a reflection of his own suffering in the form of Edgar; here we can see that Edgar is central to the role of Lear. In Act IV Edgar saves and revitalises his father Gloucester who has had his eyes removed; Edgar has found a new function, to act as his father's 'eyes' helping him to see literally and metaphorically. ...read more.

Edgar and Cordelia are in almost direct parallel, both are children who are loyal to their parents, but are disowned, by their e more greedy siblings, the only difference between the two characters is that Edgar is left at the end of the play, to rebuild society, and reflect on the tragedy that has occurred. His survival could suggest that better nature has not been completely extinguished, by the gods of evil, as he is still alive, if the gods of evil had prevailed, he might not have made it to the end of the play, Shakespeare has clearly chosen to do this purposefully, to make the tragedy less tragic. Edgar's role throughout the play could be perceived as death and resurrection, he 'dies' as Edgar, when he adopts the role of "Poor Tom" and 'rises again' when he reveals his disguise, becomes Edgar again, and defeats his brother in Act V. His survival at the end of the play, suggests that he may have learned something about his frequent character changes, some might believe hope for the future is the moral of the play, as Edgar has learned all about identity and social prejudice. He possesses the wisdom in youth which Lear so desperately required, but he obtains it too late, in his old age, after his rejected daughter has died. ?? ?? ?? ?? Alex Parry King Lear coursework ...read more.