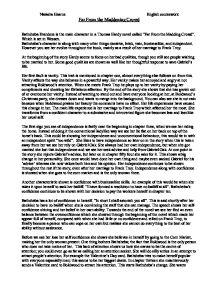 Far from the maddening crowd

Far From the Maddening Crowd Bathsheba Everdene is the main character in a Thomas Hardy novel called "Far From the Madding Crowd". Which is set in Wessex. Bathsheba's character is along with many other things decisive, brisk, vain, businesslike, and independent. However you see her evolve throughout the book, mainly as a result of her marriage to Frank Troy. At the beginning of the story Hardy seems to focus on her bad qualities, though you still see people wishing to be married to her. Some good qualities are shown as well like her thoughtful response to save Gabriel's life. Her first fault is vanity. This trait is mentioned in chapter one, almost everything else follows on from this. Vanity affects the way she behaves in a powerful way. Her vanity makes her annoyed and angry at not attracting Boldwood's attention. When she meets Frank Troy he plays up to her vanity by paying her compliments and showing her flirtatious affection. By the end of the story she shows that she has grown out of or overcome her vanity. Instead of wanting to stand out and have everyone looking at her, at Boldwood's Christmas party, she dresses down and wants to merge into the background. ...read more.

This also shows she can be selfless. When Gabriel gives her advice early in the novel she decides she doesn't like what he has to say. She sacks him whilst she was angry and acting highly impulsively. This demonstrates how she doesn't want to face the truth even though she values his opinion; later in the novel after the "drowning" of Frank Troy she relents asking him for his thoughts. Her whole relationship with Frank Troy is on impulse. She hears rumours about his wild ways but doesn't believe them. She is following her heart instead of using her head. This shows determination and stubbornness. Her determination can have positives and negatives. Her stubbornness drives Gabriel away even though he tries to protect her. It stops her from coming to her senses and not marrying Frank Troy, which she comes to regret later on. She has already shown impulsiveness and this is a decision she makes on impulse. Her decision to marry Frank could be called stupid. At the beginning of the story Bathsheba's Aunt describes her as a good scholar but "too wild". ...read more.

This is not something women in her day would normally have done. Many women are guilty of infatuation in the 21st Century but not so in Victorian days. 21st century women fall for unsuitable men all the time but it is relatively easy for them to leave, where as in Victorian times it was almost impossible for them to leave; they would not have received any assistance and would have been looked down upon. Bathsheba did not leave Frank Troy but neither did she take him back when he returned. But she did not have much choice because she was still getting to grips with him returning from the "dead" when Boldwood shot an killed him. She could be described as a forerunner for the 21st century woman; her personality is like a modern woman more than a Victorian one. Natural confidence is shown throughout, very unlike a typical Victorian woman. 21st century women are rarely described as hiding behind their men. The bravery and impulsiveness shown when she travelled to Bath at night was something else that only a wild unruly woman would have done. In the 21st century however many women go out alone and do things on impulse daily. ?? ?? ?? ?? Natasha Hearne English coursework ...read more.