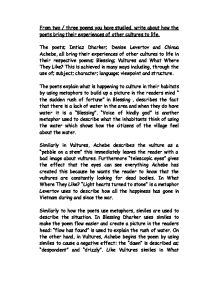 From two / three poems you have studied, write about how the poets bring their experiences of other cultures to life

From two / three poems you have studied, write about how the poets bring their experiences of other cultures to life. The poets; Imtiaz Dharker; Denise Levertov and Chinua Achebe, all bring their experiences of other cultures to life in their respective poems; Blessing; Vultures and What Where They Like? This is achieved in many ways including, through the use of; subject; character; language; viewpoint and structure. The poets explain what is happening to culture in their habitats by using metaphors to build up a picture in the readers mind " the sudden rush of fortune" in Blessing , describes the fact that there is a lack of water in the area and when they do have water it is a "Blessing". "Voice of kindly god" is another metaphor used to describe what the inhabitants think of using the water which shows how the citizens of the village feel about the water. Similarly in Vultures, Achebe describes the vulture as a "pebble on a stem" this immediately leaves the reader with a bad image about vultures. Furthermore "telescopic eyes" gives the effect that the eyes can see everything Achebe has created this because he wants the reader to know that the vultures are constantly looking for dead bodies. ...read more.

from two viewpoints; in the first stanza an outsider who didn't know much about the Vietnam War "Did they hold ceremonies to reverence the opening of buds?" is one of a whole stanza of rhetorical questions. Achebe has created this to make the reader think about the Vietnam War. This is very effective because the thought process is the most important process for the reader to have. The second stanza is from a witness of the war this is clear because the second stanza is built up of answers to the questions from the first stanza; "Perhaps they gathered once to delight in blossom, but after their children were killed there were no more buds". These answers also inform the reader of the events of the Vietnam war "their children where killed" "All the bones where charred" The poem finished by another rhetorical question "who can say" this leaves the reader thinking about the Vietnam war. Achebe has written Vultures cleverly by using short lines which makes the reader read slower. This emphasizes how bad the Vultures and the Commandant are because the reader is able take in more information as they read. ...read more.

In these three poems a message is being portrayed. In Blessing Dharker is trying to explain that there is a lack of water in the shanty town and when they do have water it's a gift from a "kindly god". A small gift brings great joy. In What Were They Like? Levertov has written the poem to explain how devastating the Vietnam War was and how it will affect the whole country in the future. On the contrary Vultures has been written to show that even the greatest evil has "a tiny glow worm" of love. In conclusion, all three poets have used different techniques to bring their experiences of culture to life in their respective poems; Vultures shows how Love is found even in the greatest evil. Blessing shows how even a little gift can bring great joy. What Where They Like? shows that love can be taken away. My favourite poem is Blessing because it has a joyful message and I think the poem is very effective because it has been very well structured by using rhetorical questions. Similarly to What Were They Like? Vultures also has been very cleverly by using short lines and I like this poem because it gives a good message. ...read more.